List of All the Orange Cap winners in IPL History 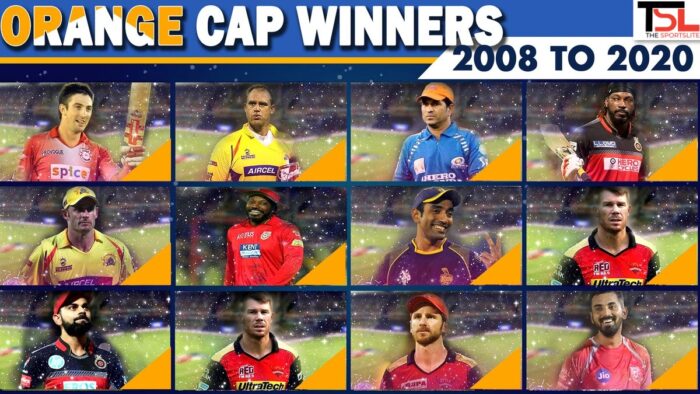 The IPL is the best platform to make name for a cricketer. The Orange Cap is presented to the highest run-scorer at the end of the season. Batsman all over the world hustle to win the prestigious orange cap. Let’s take a look at the orange cap winner for every IPL edition till now.

Know about All the Orange Cap Winners in IPL History:

The Australian prolific batsman made a name for himself playing for KXIP in the inaugural season. He scored a total of 616 runs that season in 11 matches to win the orange cap. He played with a strike rate of 139.68 and an average of 68.44. Marsh’s highest score of the edition was 115 runs, scoring 1 century and 5 half-centuries throughout the season.

Also Read: List Of All Brother Pairs In IPL history

The legendary veteran Australian won the orange cap in 2009 for CSK. He scored 572 runs that season in 12 matches with a strike rate of 144.81 and an average of 52. Hayden struck 5 fifties that season while scoring his season highest of 89 runs.

The all-time greatest Indian batsman scored 618 runs in 15 matches captaining MI to win his only orange cap in IPL. He played with an average of 47.53 and a strike rate of 132.61, having scored 5 fifties that campaign. Tendulkar’s highest score of the season was 89.

Playing for RCB, the Jamaican king scored 608 runs in 12 matches to make the orange cap his. He scored the highest score of 107 runs that season, hitting 2 centuries and 3 half-centuries all along. Gayle had a lightning strike rate of 183.13 with an average of 67.55 that edition.

The Universal Boss won the orange cap again in the year 2012 for his destructive display with the bat. He scored 733 runs in 15 matches, averaging 61.08 with a strike rate of 160.74. Gayle struck 1 century along with 7 fifties that season with the highest score of 128 runs that season.

The Australian opener played a crucial role in taking CSK to the finals in 2013. On the way, he scored 733 runs in 17 matches with a strike rate of 129.5 and an average of 52.35. Hussey struck 6 fifties that season with 95 being his highest score.

Robin Uthappa’s extraordinary form in 2014 helped KKR win the IPL title for the second time in their history. Uthappa won the orange cap for scoring 660 runs in 16 matches averaging 44 with a strike of 137.78. He scored 5 half-centuries that season with a season-best of 83 runs.

The vastly talented Australian opener made name for himself and his team SRH by winning the orange cap in 2015. Warner scored a total of 562 runs in 14 matches with an average of 43.23 and a strike rate of 156. 54. With 126 being his season-best, Warner struck 4 half-centuries 1 century in that edition of IPL.

The Indian and RCB skipper scored a gigantic total of 973 runs in the year 2016, the most runs by a batsman in a single season of IPL. Kohli struck 4 centuries that season setting a record of the most century by any player in a single IPL season. He played 16 matches that season with a strike of 152.03 and an average of 81.08 hitting 4 centuries and 7 half-centuries all along.

The much-loved Kiwi captain won the orange cap in 2018 for SRH by scoring a total of 735 runs in 17 matches averaging 52.5 with a strike rate of 142.44. He completely covered the absence of David Warner with his mind-blowing batting. Williamson scored 8 half-centuries with his season-best of 84 runs.

The talented Indian batsman won the orange cap for the year 2020. Although he captained KXIP to an unwanted 6th place finish, his efforts didn’t go unnoticed. Rahul scored 670 runs playing 14 matches with an average of 55.83 and a strike rate of 129.34. He stunned everybody by scoring his best score of 132 runs, the highest score by an Indian in IPL. He also struck 5 half-centuries and 1 century that season. In a word, KL Rahul was a one-man army for his side KXIP.