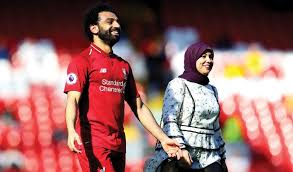 Mohamed Salah is currently ripping off the Premier League with his left foot magic for Liverpool FC. He is dubbed as the “Egyptian Messi” for his excellent left foot ability. Many people believe that Mohamed Salah is currently the best footballer in the world in recent forms. Mohamed Salah made it to Europe with FC Basel. He was once in Chelsea but failed to find his spot in the team. He then moved to Italy with AS Roma where he flourished his skills. Now in Liverpool under Jurgen Klopp, Mohamed Salah is a different beast, scoring and assisting every game. At the moment Salah is the top scorer and assist provider in Premier League. Salah enjoys a massive fan base around the whole world and as fans, we know many facts about him. But one thing we don’t know much about is Mohamed Salah’s wife. Let’s know about her.

Who is Mohamed Salah’s wife?

Mohamed Salah married Magi Sadeq on December 17th, 2013. Magi Sadeq was born in 1994 in the village of Nagrig in Gharbia, Egypt. Both Mohamed Salah and Magi Sadeq dated each other since their teenage days. They used to be friends since their school days. After dating for around 10 years, Mohamed Salah and Magi Sadeq decided to marry each other in 2013. Magi has always been a very supportive wife to Mohamed Salah. She is often seen in the stands cheering Salah. One important fact about Magi Sadeq is that she is very religious. We have seen many wives and girlfriends of superstars being hugely influential and active in Public. That’s not the case with Sadeq. She likes to maintain a very low profile and tries her best to avoid any kind of attention. Sadeq is always seen wearing a hijab, covering her whole body, whenever seen.

Mohamed Salah married his teenage sweetheart Magi Sadeq on December 17th, 2013 in Nagrig, Egypt. The wedding was a very big thing in Egypt. Many Egyptian celebrities such as Hamada Hilal, Sa’ad Al Sughayar and Abdel Basset Hamouda. The Egyptian singers sang at the wedding, making it a grand event. Magi Sadeq gave birth to their first child Makka in 2014. Recently in 2020, the couple welcomed their second child Kayan.