The SportsLiteSports at just one click!
HomeCouplesMason Greenwood's girlfriend | Check out who is the partner of English...
CouplesPlayer 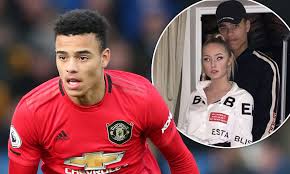 Mason Greenwood is currently one of the hot prospects in world football. The Manchester United number 11 is praised for his ability to play with both feet. Although he is a left-footer, his right foot is nowhere near to be a weak foot. Greenwood is a very talented player and has excellent finishing skills. Mason is a Manchester United academy graduate as he made it all the way up to the senior team from playing for the age-based squads. Manchester United fans love him as their homegrown star boy. However, in today’s generation, fans are not limited to knowing only on-field news, they are equally interested in knowing what’s going on outside the ground too. So, in this article let’s discuss Mason Greenwood’s girlfriend.

Who is Greenwood’s girlfriend?

Mason Greenwood is currently dating famous English model Harriet Robson. According to sources, the couple has been together for as long as 2 years now. Harriet Robson was worn on Wisbey, near Bradford in England. She is a fashion model and also an Instagram influencer. Although, Harriet stays in the spotlight but tries her best to avoid invitations into her private life. At such a young age, Harriet has become a star in the modeling industry. She is very much active on Instagram considering her field of profession.

Both Mason Greenwood and Harriet Robson went to the same school at Ashton on Mersey School in Greater Manchester. They started dating from their school days. On 1st January 2019, Mason and Harriet went on a relationship that lasted about a year. The couple had a mutual breakup after completing a year together. Harriet took Instagram to break the news of their separation. Sources said the reason for their breakup was that the couple suddenly started having a lot of problems. However, after staying apart from each other for nearly about 8 months, both Greenwood and Harriet started dating each other again. At present they are continuing their relationship and everything is fine and normal between them.