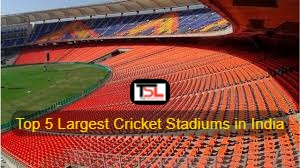 M.A. Chidambaram stadium is the second oldest cricket stadium in India and owned by Tamil Nadu Cricket Association. It has a seating capacity of 50,000. Established in 1916, M.A. Chidambaram stadium is also nicknamed Chepauk Stadium. The stadium serves as the home ground for Chennai Super Kings in IPL and Tamil Nadu cricket team in domestic cricket. The first-ever match held in Chepauk was between India and England in a test cricket match back in 1934.

The iconic Eden Gardens is the oldest stadium in India and situated on the bank of the river Ganga in the city of Kolkata. Eden Gardens holds a capacity to hold 80,000 fans at a time. West Bengal Cricket Association owns this iconic stadium with the Cricket Association of Bengal being the operator. The first match ever to be held in this stadium was a test match between India and England back in 1934. The Eden Gardens serves as the home ground of the Bengal Cricket team in domestic and Kolkata Knight Riders in IPL.

The Narendra Modi Stadium got its name after the current Indian PM Narendra Modi. The Narendra Modi Stadium is not only the largest stadium in India but the world too. It has a mammoth capacity of 1,32,000 and was built in 1983 but it got completely renovated in 2020. The Gujarat Cricket Association owns this gigantic ground and serves as the home ground for the Gujarat Cricket team in domestic matches. The first-ever game to be held here was a test match between India and West Indies in 1983.