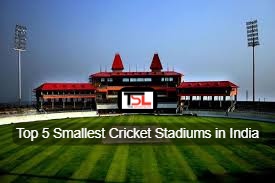 Cricket is a religion to Indians. Over the years, Indians have found a lot of interest in Cricket and The introduction of IPL played a huge role in making the sport a household thing. Stadiums play an important role in the match and A good stadium adds glamor to the game. India has a lot of iconic cricket stadiums. Some bigger, some smaller. In this article let’s discuss the Top 5 smallest cricket stadiums in India.

The Brabourne is one of the oldest stadiums in India. The stadium is located In Mumbai and built in 1937. The stadium holds a capacity of 20,000. Brabourne Stadium, previously the home ground of Mumbai Indians in IPL. Cricket Club of India holds ownership of this stadium now. The first-ever international match played here was a test match featuring India and West Indies back in the year 1948.

Also read: Sachin vs Virat: An attempt to compare the Master and the King

In 1935 the Madhavrao Scindia Cricket Ground was established. It is amongst the oldest stadiums in India. The stadium holds a capacity of 15,000. Rajkot Municipal Corporation is the owner of the stadium with the Saurashtra Cricket Association working as the operator. The stadium acts as the home ground to the Saurashtra Cricket team. The first-ever international match played here was an ODI between India and Australia.