Delhi Capitals – History, Players, Records and All you need to Know 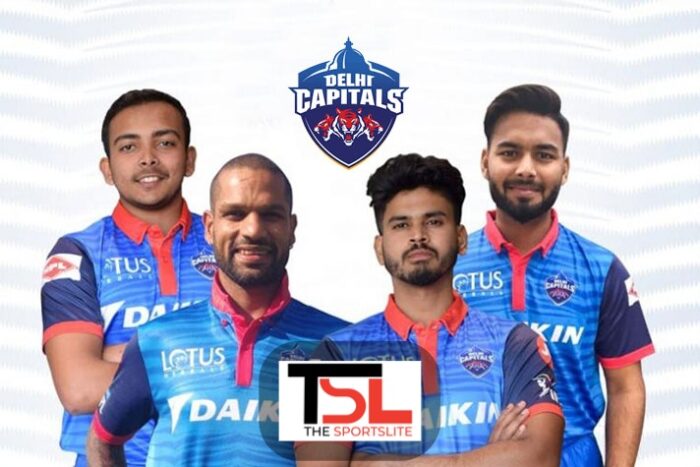 Delhi Capitals or previously known Delhi Daredevils have always been the point of discussion in the IPL. Well, during the early years of IPL for their world-class batters and bowlers and nowadays even more famous for their exciting young players who have recently led the side to their first IPL Final.

Know everything about Delhi Capitals – “This is New Delhi“

How was Delhi Capitals franchise formed?

The Delhi-based franchise was bought by the property development company GMR Group for US$84 million and the name of the team was Delhi Daredevils.

In March 2018, GMR sold a 50% stake in the Delhi Daredevils to JSW Sports for US$77 million and in December of the same year, the name was changed to Delhi Capitals.

Delhi has Gem of players

Delhi had been blessed with world-class players coming from all around the globe. They had Gautam Gambhir as their captain, then they had explosive firepower in Virendra Sehwag, Kevin Pietersen, David Warner, JP Duminy, AB de Villiers, Ros Taylor, Tillakaratne Dilshan, Mahela Jayawardane.

Amit Mishra has been with the Delhi side right from 2008. This IPL legend has the most number of wickets for DC.

The names are enough to intimidate any opposition, then just imagine how the opposition would have felt on the field against these greats.

Despite the big names, they could never stamp their authority on the IPL. From 2008 to 2018, they have qualified for the playoffs only 3 times, which definitely doesn’t justify the potential of the squad.

Though they were in the Playoffs of the first two editions, the year 2012 is regarded as the best year they ever had. They won 11 of their 16 matches. Virendra Sehwag, Mahela Jayawardene, and Kevin Pietersen plundered the runs. Umesh Yadav and Morne Morkel took 44 wickets amongst them.

Despite all their efforts, they failed to reach the Final.

The best year was followed by the worst period Delhi franchisee has ever had. The great players that they had either took retirement from cricket or moved to a different franchise. Obviously, Delhi went through a poor patch. The performances in that particular patch were abject. The poor patch lasted from 2013 to 2018 and the best year of this patch was when they finished the league stage in 6th position in 2016 and 2017.

Change in name, change in fortune

In 2018, owners changed, management changed, the name changed and so did the fortunes. Delhi Daredevils changed their avatar from red and blue to sky blue and they became Delhi Capitals.

They also bought the veterans from the different franchises, the prominent names are Ravichandran Ashwin, Ajinkya Rahane, and Steven Smith.

The team gelled up pretty quickly and it became a nice blend of youth and experienced players which has been led by Ricky Ponting.

Returning to where they belong

Shreyas Iyer became the captain of DC in 2018 when Gautam Gambhir stepped down from the captaincy in the middle of the tournament. Delhi finished at the bottom, though there hadn’t been any fault of Shreyas Iyer in this.

The appointment of Shreyas Iyer and the entire revamp of the side did wonders to the team. In 2019, they finished 3rd on the table and promised so much for the IPL 2020.

In 2020, they reached the finals, unluckily were defeated by the Mumbai Indians who have been regarded as the best T-20 franchise team in the entire world.

Not at all surprisingly, they are sitting right on the top of the pile in the 2021 IPL and looking like one of the favorites for the prestigious IPL trophy.

We wish him all good for the rest of the season!