The SportsLiteSports at just one click!
HomeFootballGerard Pique Net worth 2023, Salary, Endorsements, Cars, Houses, and Charities
FootballNet Worth 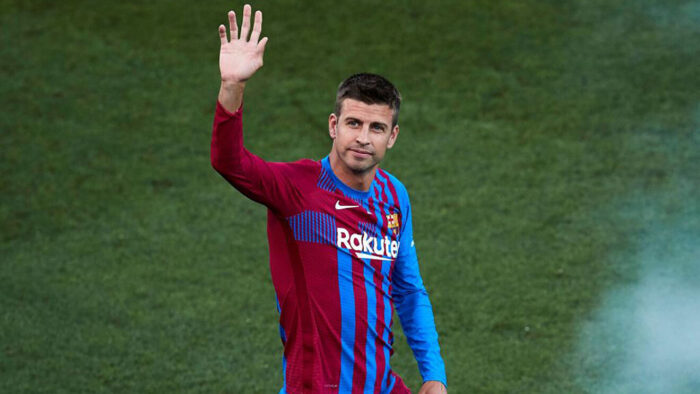 Gerard Pique is a Spanish footballer and a gun defender. He is among the top defenders of this generation. Gerard has been vital for Barcelona’s success over the years. Though recently he has faced a lot of criticism as Barcelona itself is going through a gloomy phase, but new coach Xavi has shown faith in him. To be honest he deserves the faith considering the service of Gerard for the Catalan side. Read the full article to know about Gerard Pique Net worth 2023, Salary, Endorsements, Cars, Houses, and Charities. Astoundingly he is an MBA degree holder in the Business of Entertainment, Media and Sports from Harvard University.

The center-back signed his first professional contract with Manchester United in 2004. Gerard wore the famous red jersey for 2 years before moving to the Spanish side Real Zaragoza. His defending prowess impressed Barcelona and they pounced on him in 2008. Gerard is still serving Barcelona with the same zeal and enthusiasm.

Spanish Footballer Gerard Pique has an estimated net worth of $55 million.

Gerard Pique has endorsed himself in one of the best companies like Nike, Laureus Foundations, etc. According to the reports in 2017, with these deals, the defender earned more than $3 million per annum.

In 2015, Piqué and Shakira purchased a mansion in Barcelona for 5 million Euros. The villa offers 1,500 square meters of living space. The mansion also sits on multiple acres of private gardens. The outdoor space also features a swimming pool and a waterfall, and the gardens are kept private by dense trees. That being said, the three-story home also offers incredible views of the city below.

This Spanish center back has some of the fastest and most luxurious cars. The collection includes an Audi RS7 for $279570 and a Range Rover for $208,597. He also owns a Mercedes, BMW, and Audi Q7, but their price is unknown to us.

Gerard was the brand ambassador for Barcelona’s global partner Beko. The campaign was to make people aware about child obesity. Beko donated 1€ to UNICEF for every post with #EatLikeAPro.

FAQ about Gerard Pique Net Worth 2023 and money

Q: What is the net worth of Gerard Pique?

Q: What is the Salary of Gerard Pique?

Q: Which companies and brands did Gerard Pique endorse?

Ans. Companies like Nike and Laureus Foundations have endorsement deals with Gerard Pique. He was a brand ambassador for Beko.

Q: What is Gerard Pique’s position on the field?

Ans. Gerard plays as a center-back.