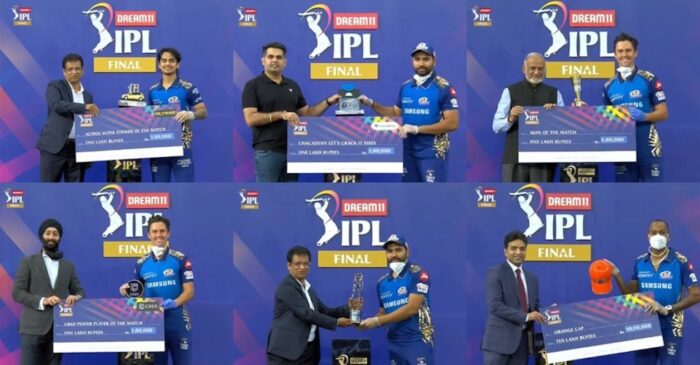 Arguably the IPL is the best cricket league in the world. The best league sure does award some honors to players/teams in each aspect. The tournament honors the best players at the end of each season with various awards. The awards available in IPL are The Orange Cap, The Purple Cap, Most Valuable Player, Maximum six award, Emerging player of the tournament, and Fair Play award. Let’s take a brief look at each of the types of awards in IPL in this article.

Types of awards in IPL (individual):

The wonderful-looking Orange Cap is awarded to the highest run-scorer of the season. It was introduced back on 25th April, a week after the start of the season. While the tournament runs, the batsman with most runs wears the cap while fielding or batting. The most run-scorer of the tournament gets it on the final day permanently. Brandon McCullum was the first player to wear the orange cap and Shaun Marsh became the first-ever orange cap holder at the end of the season. David Warner is currently the player with the most orange caps in IPL history, winning the award 3 times.

The elegant-looking Purple Cap is awarded to the highest wicket-taker of the season at the tournament’s end. It was first introduced on 13th May 2008. The leading wicket-taker wears the cap while fielding while the leading wicket-taker of the season wins the cap on the final day. Pakistani pacer Sohail Tanvir won the first-ever Purple Cap in IPL. Currently, both Dwayne Bravo and Bhuvneshwar Kumar hold the record of winning the cap 2 times each, most by any player. Bhuvi became the first player ever to win the Purple Cap in two consecutive seasons.

Basically, the best player of the tournament gets the Most Valuable Award. Before 2012 the award was called “Man of the tournament”. But changed its name the following season to “Most Valuable Player of the Tournament”. The award is given on the basis of individual points where every four is calculated as 2.5 points, six is calculated as 3.5 points, dot balls bowled as 1 point, wickets as 3.5 points, and catching and stumping yields as much as 2.5 points. The player with the most points gets the award at the end of the season. Both KKR player Andre Russell and Sunil Narine have won the award most of the time, 2 each. Shane Watson has managed to get 386 points in 2013, most in a single season till now.

Batsman hitting the most six in a season gets the Maximum Six Award. Sanath Jayasuriya became the first receiver of the award in 2008. Chris Gayle has won the award record 4 times till now. Gayle struck 59 sixes in 2012. It is still the highest number of sixes hit in a single season followed by his fellow Jamaican Andre Russell with 52 sixes in 2019.

#Emerging Player of the tournament

The Emerging Player of the tournament is given to the best young player of the season. And has the potential of becoming a future star. Shreevats Goswami playing for RCB was the first-ever player to win the award back in 2008.

Criteria for selecting the emerging player of the year are:

Types of awards in IPL (team):

IPL awards the Fair Play Award to a team. It is not an individual award. After the completion of each match, the two on-field umpires along with the third umpire allots points to each team on the basis of their performance to hold the spirit of the game. 10 points are the maximum a team can score every match. CSK has won the Fair Play Award for most of any team till now, winning the honor 6 times in 2008, 2010, 2011, 2013, 2014, and 2015 respectively.

Also read: Top 3 teams with the most IPL titles