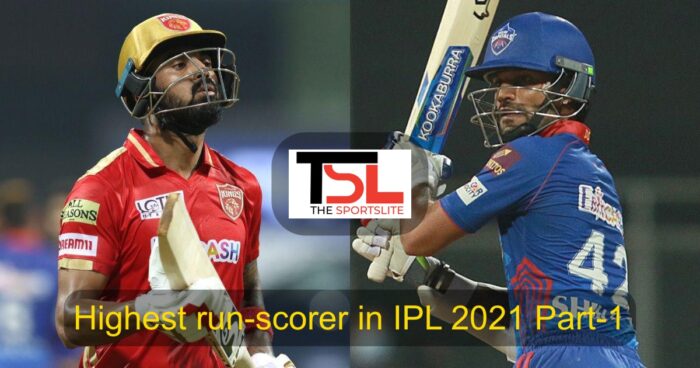 The IPL 2021 was paused midway to prevent the spreading of the coronavirus pandemic after a few players and staff tested positive. The world’s best cricket league will be back on track again this week. UAE is the new venue. The Orange cap is presented to the leading run-scorer in IPL every year. Let’s take a quick look at the highest run-scorer in 2021 IPL so far with players’ position when the tournament will resume.

The immensely talented RR’s wicketkeeper-batsman who ranks fifth with 277 runs till now in the tournament having played 7 matches. He has a strike rate of 145.78 with an average of 46.16.  Samson has scored an emphatic 119 run inning this season which is also his highest score of this edition.

The young talented opener from DC ranks fourth on our list. Prithvi has scored 308 runs so far in this year’s IPL. 82 is his highest score of the season till now having an impressive strike rate of 166.48 with an average of 38.50.

The experienced South African batsman has got 320 runs till now under his name. He is maintaining good form having 95* as his highest score of the season till now. Faf has got a strike rate of 145.45 with an excellent average of 64.00 in this year’s IPL so far.

The PBKS captain KL Rahul has scored 331 runs with the bat so far in this year’s IPL. Being one of the most talented batsmen Rahul has scored his runs with a strike rate of 136.21 maintaining a fantastic average of 66.20. 91* is his highest score of the season till now.

Shikhar Dhawan currently holds the orange cap in this season. He is the highest run-scorer in 2021 IPL so far. The DC opener is going through a fine form having scored 380 runs in this edition of IPL so far. 92 is Shikhar Dhawan’s highest score so far.  He has got an impressive average of 54.28 with a strike rate of 134.27. All eyes will be on him to see if he can hold his orange cap till the season end.