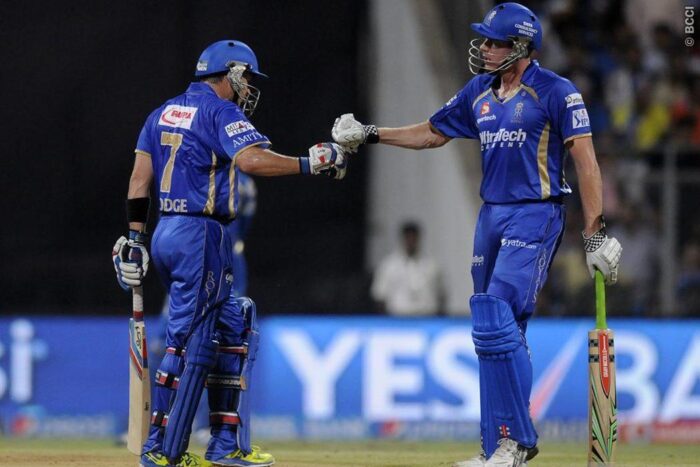 The IPL is known for its competitiveness and professionalism. It’s always not possible for batsmen to bat till the end. Bowlers need to come to the crease sometimes to bat due to rapid falls of the wicket. Lower order batting is a very difficult task even more difficult in a star-studded tournament like IPL. So in this article, we will discuss the best 8th wicket partnership to ever happen in IPL.

Preview of this match

The story travels back to 2014 when RR was facing MI in the 44th match of the season. MI won the toss and decided to bat first. Michael Hussey along with Lendl Simmons came to open MI’s innings. Both the batsman made half-centuries. Captain Rohit Sharma came in to play the role of a finisher and scored 40 runs off just 19 balls with a strike rate of 210.52. MI set a target of 179 for RR to chase in 20 overs. Although coming to chase RR found themselves in a very tricky situation having lost 7 wickets for just 75 runs. All the top and middle-order RR batsmen failed to score double-digit scores apart from Karun Nair (48 off 24 balls).

The 8th wicket partnership began between Brad Hodge and James Faulkner, both known for their skills with the ball instead. Playing carefully both managed to rotate strikes and maintain the flow of runs. Against all odds both the player managed to make a 69 runs partnership between them. It was because of the partnership that RR could even come close. Hodge was dismissed by Santokie at the 18.5 over. He managed to contribute 40 runs off 30 balls with a strike rate of 133.33, having hit 3 sixes on course. Faulkner scored 31* runs off 21 balls with a strike rate of 147.61 having struck 2 sixes and a four. Despite the hard fight put on by both the batsmen, RR lost the game by 25 runs at the end.