List of All the Purple Cap Winners in IPL history 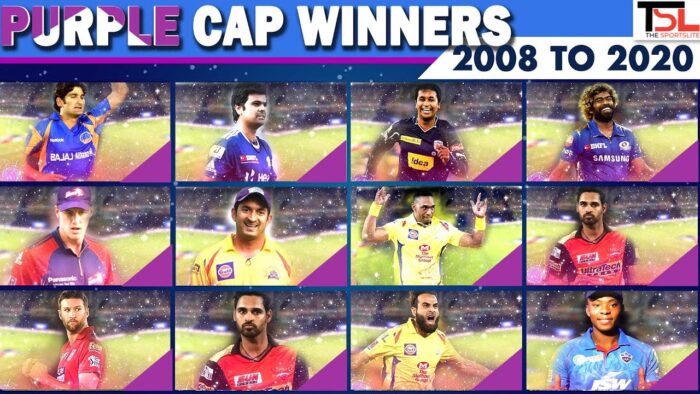 The IPL is the best cricket league in the world and is played by world-class cricketers all over the world. The Purple Cap is given to the bowler with the most wickets at the season end. Being a purple cap winner in IPL shows the actual caliber of the bowler. To get the cap, bowlers give their very best. In this article, we will discuss the Purple Cap winners from each year beginning from the inaugural season.

Pakistani players are barred from playing in IPL but the inaugural season was an exception. Sohail Tanvir playing for RR lit up the maiden IPL season with his extraordinary bowling. He took 22 wickets in 11 matches with an economy of 6.46 including a magical spell of 6/14 against CSK. Tanvir played an instrumental role in RR’s only title-winning campaign to date.

Playing for now-defunct Deccan Chargers, RP Singh went on to win the award for most wickets in 2009 with 23 wickets in 16 matches. He had an economy of 6.98 in that year’s title-winning campaign.

Unplayable at times, Pragyan Ojha was one of the best Indian spinners in his days. He won the purple cap in 2010 for picking up 21 wickets in 16 matches with an economy of 7.29. Playing for Deccan Chargers, Ojha had some good wickets taking spells that year.

The Yorker King playing for MI won the purple cap in the year 2010 for picking up 28 wickets in 16 matches with an exceptional economy of 5.95. Arguably the best IPL bowler of all time has won the IPL title 4 times besides being the tournament’s all-time leading wicket-taker.

The tall South African pacer won the 2012 purple cap for Delhi Daredevils by grabbing 25 wickets in 16 matches. He had an economy of 7.19 that year. Morkel played a crucial role for DD to finish top of the table in group stages.

The West Indies superstar made the purple cap him in the year 2013 by grabbing a record of 32 wickets in 18 matches. Bravo had an economy of 7.95. He is considered one of the best players ever to represent CSK.

Mohit Sharma had a quick prime. Playing for CSK he won the award for most wickets in the year 2014 for picking 23 wickets in 16 matches with an economy of 8.39. Mohit stole the show with excellent variations in pace bowling but his career declined unexpectedly after.

The Indian swing king played a crucial role in SRH’s maiden IPL winning campaign. Bhuvi picked a total of 23 wickets in 17 matches with an economy of 7.42.

The Australian pacer put on an excellent display for KXIP by winning the award for most wickets in 2018. He was enjoying his prime that season. Tye picked up 24 wickets in 14 games with an economy of 8 that edition and named himself in the list of purple cap winners in IPL history.

One of the greatest T20 spinners of all time, Imran Tahir won 2019’s purple cap playing for CSK. Tahir took a total of 26 wickets in 17 matches with an economy of 6.69 that season. Proving age is just a number, he impressed everyone with his near-perfect spin bowling that season.

The South African pacer grabbed everyone’s attention in 2020 with unimaginably good death over bowling. Rabada won the award for most wickets that year by picking up 30 wickets in 17 matches, the second-highest wicket-taker in a single season. He had an economy of 8.34 that edition and played an instrumental role in taking his team to the finals.