The SportsLiteSports at just one click!
HomeFootballLionel Messi Press Conference: Messi In Tears After Conforming Exit From Barcelona...
FootballForever Facts

Lionel Messi Press Conference: Messi In Tears After Conforming Exit From Barcelona Due To FFP Have a look at the emotional farewell press conference of Lionel Messi who is leaving Barcelona after spending 21 years at the club and becoming a legend.

Lionel Messi bids farewell to Barcelona in an emotional press conference after contract talks with the club were not successful due to the Financial Fair Play of La Liga. Meanwhile, Barcelona are still not able to register their new signings with La Liga due to the wage cap imposed.

Pic of the year.
End of an era.
Historical day. 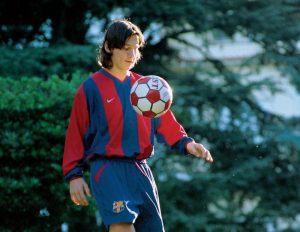 He has spent all his life in Barcelona, where he won a club-record 34 trophies, including ten La Liga titles, seven Copa del Rey titles, and four UEFA Champions Leagues. Lionel Messi has scored over 750 senior career goals for club and country and has the most goals ever by a player for a single club.

Messi was not able to control his tears in front of the world after contract talks with Barcelona did not progress well, as a result, he will join another club ahead of the new season. He said in his final press conference-

“My new contract was DONE. All done. I wanted to stay and when I come back from holiday, it was done. …then it’s how Laporta explained it. At the last minute, with everything with La Liga, it couldn’t happen”. 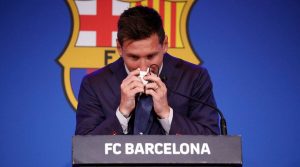 “I was convinced to stay here at Barcelona. This is my home, our home. I wanted to stay at Barça and it was the plan… and today I’ve to say goodbye after my entire life here”.

“I’m really sad because I didn’t want to leave this club. I love Barcelona and I wanted to stay, my contract was ready. I did everything in my possibility to stay”.

“There was no problem with Barcelona, really. I was ok with the club on every detail. We had an agreement on everything, I was convinced to stay at Barça… but it was not possible because of Liga rules”.

These were the words of Lionel Messi as he concluded his press conference with questions from the reporters. However, everybody wanted to ask one question, which shirt Lionel Messi will wear ahead of the new season?

“Paris Saint-Germain is a possibility, yes. At the moment nothing is confirmed, I received lot of calls after Barcelona statement. We’re talking about it”.

A possible reunion with Neymar

Lionel Messi is most likely heading to Paris next week in order to complete his transfer to Paris-Saint Germain who have offered him a whopping €35 million per year salary. It will be hard to imagine Messi in a PSG shirt but football has its own way of surprising you.

Messi is ready to accept – he’ll sign with PSG once final details will be fixed. Now planning for travel, medical, unveiling. 🇫🇷 pic.twitter.com/b28XC5DBoR