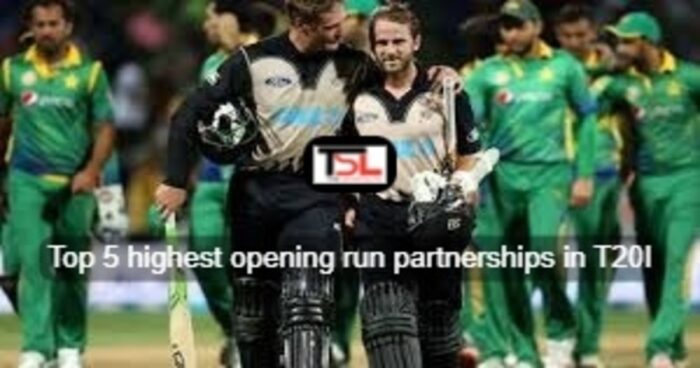 T20 cricket is the game of runs and runs. Openers lay the foundation of runs in a team. The 1st wicket partnership is very crucial in cricket be it any format. Middle-order can be really confident with their personal batting if the openers put a good partnership on the board. We have seen many such great partnerships over the year in T20Is. Let’s discuss the Top 5 all-time highest opening run partnerships in T20I in this article.

Martin Guptill and Kane Williamson struck an excellent 171* runs partnership against Pakistan in 2016. Pakistan batting first managed to put a target of 169 in 20 overs. Guptill along with Captain Williamson came to open the innings for New Zealand. Both the openers smashed the Pakistani bowlers at their will. Guptill scored 87* off just 58 balls with a strike rate of 150. Williamson smashed 72* off just 48 balls with also a strike rate of 150. New Zealand won the match comfortably with 10 wickets in hand and 14 balls to spare.

Mohammad Rizwan along with Babar Azam made a massive 197 runs partnership against South Africa in 2021. It is the highest opening partnership while chasing in T20I. South Africa put a target of 204 runs in 20 overs. Babar Azam accompanied by Rizwan came to open the Pakistani innings. Babar Azam went berserk and smashed the South African bowlers everywhere in the field. He scored 122 runs off just 59 balls with a strike rate of 206.77. Rizwan accompanied Azam with 73 runs off 47 balls with a strike rate of 155.31. In the end, Pakistan won the match with 9 wickets and 12 balls remaining.

Aaron Finch came to open the Australian innings with D’Arcy Short against Zimbabwe in 2018. Finch smashed the whole Zimbabwe bowling unit one after other. He scored an unbelievable 172 runs off just 76 balls with a strike rate of 226.31. Short accompanied him by scoring 46 off 42 balls. Australia was able to put a target of 230 courtesy of Finch. Zimbabwe ran out of luck and ended their innings at 129/9. Australia won the match easily by 100 runs.

Also read: Who Is KL Rahul’s Girlfriend? To Whom Indian Star KL Rahul Is Dating?

Hazratullah Zazai along with Usman Ghani came to open Afghani innings against Ireland in 2019. Zazai went to full destructive mode and smashed each and every ball he faced. He scored a spell-bounding 162* off just 62 balls with a strike rate of 261.29. Ghani gave him full support with his 73 runs innings off 48 balls with a strike rate of 152.08. Courtesy of Zazai, Afghanistan was given a mammoth target of 279 in 20 overs. However, Ireland was only able to score 194 runs and Afghanistan won the match by 84 runs at the end.