The SportsLiteSports at just one click!
HomeCricketDeepVeer in IPL: ranveer and Deepika pitch for New IPL team
CricketIPL 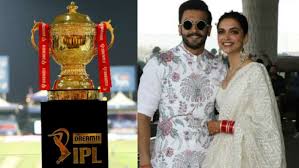 The BCCI searches for possible purchasers for the two additional teams as the Indian Premier League expands from an eight-team tournament to a 10-team. Deepika Padukone and Ranveer Singh, are preparing to enter the race to purchase a new IPL team.

Surprisingly, Ranveer Singh and Deepika Padukone’s upcoming film is also about cricket. ’83, helmed by Kabir Khan, will see Ranveer take on the role of Kapil Dev, while Deepika plays his wife. According to reports, Ahmedabad and Lucknow are the top contenders for the places of two new franchises. With the mega auction set to take place later this year, two new IPL clubs will enter the cash-rich league. The BCCI is seeing many prominent names expressing interest in bidding ahead of the bidding process, and is set to take place in Dubai on October 25.

Before the bidding begins, Ranveer Singh and Deepika Padukone’s names are there in the list of potential owners of the new IPL franchises. It is also rumored that Manchester United’s owners are interested in bidding for an IPL club for the next season.