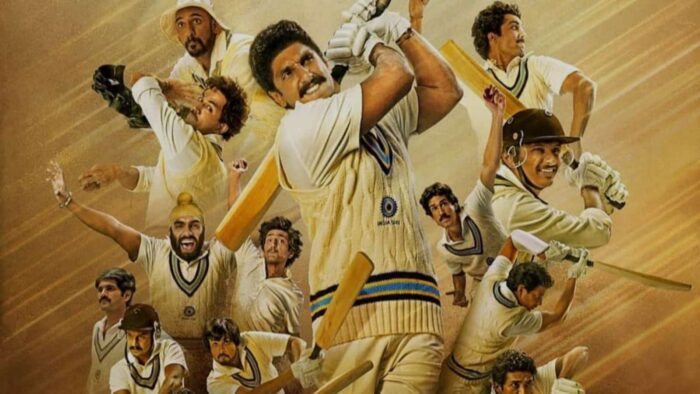 25 June 1983, that historic day when the Indian Cricket team lifted the World Cup against all odds. At the iconic Lord’s stadium, the Indian team lived a dream and defeated the most predominant contender and two-times defending champions, West Indies, by 43 runs. The moment when the unstoppable Kapil’s devils brought the laurel home, is still considered as the turning point in Indian Cricket history. The delirium tremens of that victory still remains fresh in every cricket fans’ mind and heart. In such a situation, the Ranveer Singh starrer-movie 83 not only takes us down memory lane but also inculcates a feeling of nationalism into our hearts. In this article, we will take a look at 83 movie-making story and some unknown facts.

The story of this movie which is based on Team India’s campaign in the 1983 World cup is written by Kabir Khan, Sanjay Pooran Singh Chouhan, and Vasan Bala. While Sumit Arora allied Kabir Khan for the dialogues of the film. The brilliantly composed dialogues give lumps in spectator’s throat and also makes them bounce off the walls at various moments. The film is beautifully poised with the matches and events surrounding it. However, this film can also be called Kapil Dev’s biopic as it highlights his personal journey and growth as well.

Nobody had even an whisker’s hope that India can win the Cup. Batting first, India managed only 183 runs which never seemed enough for the Caribbean batting lineup. The explosive Vivian Richards gave them a perfect start and was batting on 33 runs off 27 balls. It seemed like a smooth sailing for the reigning champions. Kapil Dev was clueless on whom to hand over the bowling proceedings. Madan Lal, who was going slightly expensive at that time by giving 21 runs in 3 overs demanded the ball. Kapil Dev couldn’t turn him down. Richards went big again. The ball didn’t connect well and Kapil Dev took a stunning catch to dismiss Viv Richards. His wicket saw the decline of Caribbean batting. And the entire team got skittled out for just 140 and India scripted history.

The film not only ignites a feeling of sportsmanship but also patriotism. The beauty of the movie lies in the fact that the story doesn’t revolve around any one character. Each character puts energy into the film and lives the dream.

Ranveer Singh portrays Kapil Dev in the film while his real wife Deepika Padukone is also his reel wife, Romi Dev. Notably, this is their first on-screen appearance after their marriage. When Ranveer Singh was announced as Kapil Dev, many questions were raised against it. Of course, nobody doubted his acting prowess, but the mismatched personalities put some feelers out. However, it is Ranveer’s savvy that while watching the film, it is difficult to decide whether it is Ranveer or actually Kapil Dev.

Popular Punjabi Singer Harrdy Sandhu who is making his Acting Debut with the film ’83’ was a Cricketer in his Earlier Days. He had represented Punjab in First Class Cricket & was also a part of the Indian Squad in 2004 under 19 World Cup alongside Shikhar Dhawan, Suresh Raina, Dinesh Karthik. But an elbow injury made him give up on his dream and thus he made his passion of singing his profession.

83 Movie cast is as follows:

The movie is directed by Kabir Khan. Further, 83 is a big budget and multi star movie, so a team of producers came on board for it. The movie is jointly produced by Ranveer Singh, Deepika Padukone, Kabir Khan, Sheetal Vinod Talwar, Vishnuvardhan Induri, Sajid Nadiadwala, Reliance Entertainment and 83 Film Ltd.

A UAE-based financier has approached the Andheri Metropolitan Magistrate Court in Mumbai seeking that process be issued against a few filmmakers and Deepika Padukone for the film 83. He has accused the producers for allegedly conspiring and cheating him in the process of producing the film. Through the complaint, FZE has sought for issuance of process against all the accused for allegedly committing offences under Sections 405, 406 (criminal breach of trust), 415, 418, 420 (cheating) and 120B (criminal conspiracy) of the Indian Penal Code (IPC).

Some unknown facts about the movie 83

One of the most awaited movies, 83, which releases in theaters on the Christmas’ eve, has some trivia associated with it. Listed below are some unknown facts of the movie 83. Have a look: