5 Indian Cricketers who have older wives – Raina, Bumrah, Hardik Pandya into the list 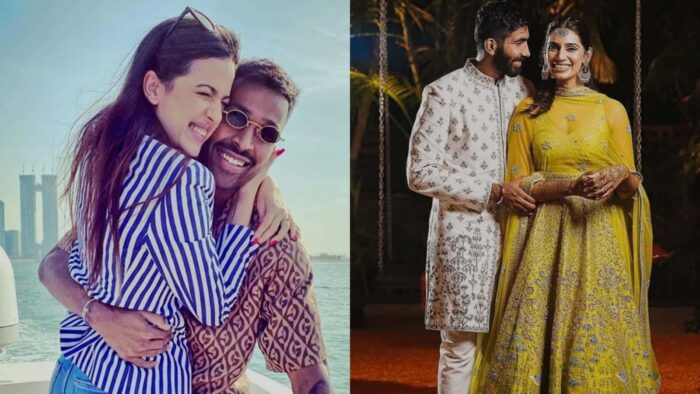 Cricket and cricketers relish a massive fan base in India. Not just their professional life but the personal life of players grabs a lot of limelight. In the era, where various stereotypes are being shattered, our cricketers are not lagging behind. It is ofttimes believed that the girl should be younger than her male counterpart in a marriage. However, “age is just a number when one finds their soulmate in a person” and Indian cricketers seem to be validating this saying very often. They say that Love is blind and knows no boundaries. For two people who are head over heels in love with each other,the age factor hardly matters. In this feature, we will have a look at 5 Indian Cricketers who are younger than their wives.

On April 24, 1973, the “God of Cricket” was born in Mumbai. The most notable name among Indian Cricketers who have older wives is Sachin Tendulkar who is 6 years younger than his wife Anjali, who was born as Anjali Mehta in 1967. She hails from a Gujarati family. Sachin and Anjali give us some major couple goals. Anjali has been a massive support to Sachin throughout his career. And he was quite clear in his retirement speech that his career wouldn’t have panned out as it has if it was not for his wife. Anjali was not a cricket buff when she first met Sachin in 1990 at the Mumbai Airport. While she was there to pick up her mother, the ‘Master Blaster’, who just scored his maiden Test century, was returning from England along with the Indian team.

Despite not being a cricket fan, she found Sachin cute and thus started waving and shouting at him. Then, via a mutual friend, she managed to get his number. They started meeting each other and shared a long distance relationship before they got hitched together in 1995. Anjali, however, is 6 years elder to Sachin but age factor didn’t turn out to be a hurdle in their relationship.

An explosive batsman, one of the most agile fielders of all time, and a handy off-spinner, Suresh Raina was no less than a complete package during his heydays. However, he announced his retirement from all formats of cricket on August 15, 2020 and plays only for IPL franchise Chennai Super Kings which is led by MS Dhoni. Raina and Priyanka knew each other since childhood but they lost touch after Priyanka’s family shifted base to Punjab. Priyanka is the daughter of Raina’s childhood coach. Suresh Raina and Priyanka Chaudhary tied the knot on April 3, 2015.

Unlike other celebrity weddings, their wedding ceremony was attended by a lot of guests from cricket, politics as well as the glam world. The then Indian skipper MS Dhoni along with his wife Sakshi, Virender Sehwag with his wife Aarti and several other cricketers attended the high profile marriage. Notably, Priyanka is five months older than Suresh Raina. Raina was born on 27 November 1986 in Ghaziabad, Uttar Pradesh. While Priyanka was born on 18 June 1986 in Rajnagar, Ghaziabad.

Virat Kohli and Anushka Sharma have a zestful love story. There have always been speculations about their relationship, however, they never accepted it publicly. Many a times, when Virat goes through a rough patch, the blame is always laid on Anushka’s door. Anushka also has confronted this many times. Notably, Virat and Anushka met for the first time during an ad shoot. The couple dated for a long time, before they finally got married in a hush-hush ceremony in Italy in 2017. However, the fact to be noted is that Anushka is a few months older than Virat. Both of them were born in 1988, Anushka on May 1 while Virat on November 5. Virat Kohli and Anushka Sharma are now married happily for four years. Together they are parents to an adorable daughter Vamika who was born on January 11, 2021.

Also Read: Top 5 Players With The Most Social Media Following

Another current player to find his place in the list of Indian Cricketers who are younger than their wives. The flamboyant Indian all rounder Hardik Pandya instantly surfaced the entire social media on New Year’s 2020. Hardik announced his engagement with Nataša Stankovic. Nataša too is a known face in the entertainment industry. She has featured in several TV shows and a few movies. Amidst the COVID-19 pandemic’s Lockdown, the couple got married in a private ceremony. Notably, Hardik was born on 11 October 1993 in Chaurasi, Surat district in Gujarat. While Nataša was born on 4 March 1992 in Pozarevac, Serbia and that means Nataša is tab elder to Hardik. But for a couple madly in love with each other, the age is literally just a number. The couple is leading a happy married life and welcomed their son Agastya Pandya on 30 July, 2020.

Team India pace spearhead Jasprit Bumrah is the latest addition to the list of Indian Cricketers who have older wives after he tied the knot with sports presenter Sanjana Ganesan. The couple married with only family members and close friends in congregation amid the coronavirus pandemic. Bumrah and Sanjana Ganesan got hitched together on 15 March 2021. The details from their low-key but lovely Goa wedding gradually surfaced on social media. “In the midst of a garden of Indian grown flowers, Sanjana and Jasprit celebrated their love for each other,” wrote their wedding designer Devika Narain. Bumrah was born on 6 December 1993 in Ahmedabad, Gujarat. Sanjana was born on 6 May 1991 in Pune. Therefore, Bumrah is two years and seven months younger than his better-half Sanjana. Sanjana Ganesan has also been a finalist of Miss India. She also participated in MTV’s reality show Splitsvilla in 2014.

In a good and healthy relationship, love, respect and honesty are the most important things. However, ofttimes, we end up giving too much heed on age. While many a a times, we forget that as long as there is a true love and the commitment, nothing else matters. Our cricketers are cool enough to remind us that age is no barrier in love. Via this article, we are not judging anybody, it is just an informative content and has no other angle to it.