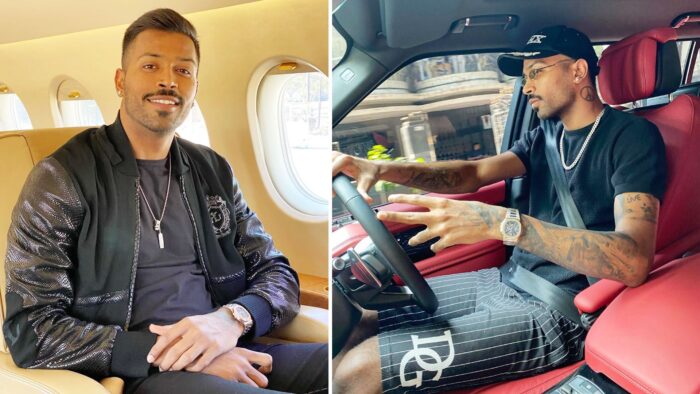 The IPL is regarded to be the stage where talent meets opportunity. Over the years, we’ve seen quite a lot of youngsters come and prove their worth but none have left quite a mark as one Hardik Pandya. Pandya was the answer to the prayers of millions of Indian fans who dreamt of affording a quality all-rounder since the days of Kapil Dev. Hardik won over fans and experts alike with his stupendous all-around activities and earned quite a reputation as a pinch-hitter at the death as well. As of 2021, Hardik is one of the richest cricketers in India and boasts of incomes in 8-figures every year. That being said, this article gives a detailed insight into the financial assets and the net worth of Hardik Pandya.

A big hitter and a fast-bowling all-rounder, Hardik ticks all the boxes that a team desires from an all-rounder. It was no surprise that he was fast-tracked into the Indian ODI and T20 side after a successful run in the IPL 2015. The then 22-year-old seamlessly fit into the Indian T20 team and was selected for the 2016 T20 World Cup. He was soon given an ODI cap as he assumed the role of an all-rounder at no. 7. Pandya’s brave efforts in the 2017 Champions Trophy Finals fell short as he couldn’t take his side to championship glory.

Hardik soon made his test debut against Sri Lanka and made a half-century in his first innings. Since then, Pandya became a prominent figure in the Indian side across all formats of the game. He was an integral part of the 2019 World Cup squad as his all-around abilities proved to be vital for the Men-in-Blue. Hardik had to undergo back surgery which ruled him out of cricket for several months. He returned to play for the Indians in the 2021 tour of Australia, however, only as a pure batsman. His injury took a lot out of him and Pandya took a back seat when it came to bowling, for the greater good. He was adjudged the man of the series for his stellar performances. At just 28, Pandya is currently representing the Indian team in the T20 World Cup.

Hardik Pandya is a part of the Grade A cricketers as announced by the BCCI in 2021. As per the terms of the contract, the Gujarat-born is guaranteed an amount of INR 5 Crores a year. However, this does not include the match fees he is paid for representing his country after every match. Hardik is also an integral part of the IPL giants Mumbai Indians as he’s been representing the MI Paltan since 2015. He was retained ahead of the 2018 mega auctions by the Chennai-based franchise for an annual salary of INR 11 Crores. However, keeping an eye on his recent outings with the bat for the 5-time champion side, his future with the franchise may be in jeopardy.

Hardik not only earns from much but also from his personal investment and some brand Endorsement from some of the popular companies like Monster Energy, Hala Play, Gulf Oil, Star Sports, Gillette, Zaggle, Sin Denim, boAt, oppo, and EUME. Also, Pandya has been charging his deal 1.25 to 1.50 crore per endorsement deal. Putting him on the list of one of the most popular figures in Indian Cricket at the moment.

Hardik Pandya and Krunal Pandya have a new address in Mumbai and it’s a sprawling 8-BHK apartment in Bandra. The swanky new Mumbai property that they’ve rented spreads across 3838 sq ft and is at Rustomjee Paramount in Bandra-Khar. The Pandya brothers bought this luxurious new apartment in late 2021. However, they still have their previous house in Diwalipura in Vadodara, Gujarat. Hardik also owns some properties in real estate which are worth Rs. 5.2 crore across the country.

The 28-year-old also has many luxurious cars which are seen on Mumbai roads. He boasts of a collection including Mercedes AMG G63 (INR 2.19 crore). In addition to this, he has a Lamborghini Huracan EVO of (INR 3.73 Crores) and an Audi, which is a present from AUDI for breakthrough performance at the Indian Sports award in 2018.

Controversy: The Koffee with Karan Debacle

During the show, Hardik made some misogynistic and sexist comments which led to a huge controversy. Later, the all-rounder took to Twitter and apologized for hurting people’s sentiments. Both Hardik and Rahul were suspended by BCCI, which was lifted after some time and they were fined INR 20 Lakhs.

The Net Worth of Hardik Pandya comes around $4 million (30 crores in Indian rupees) in 2021. He is the highest-paid Indian cricketer. Where’s Mumbai Indian pays him a heavy amount of Salary of Rs.11 crore per year for playing IPL. He generates an income of Rs. 12 crores including some of the popular brands like Gulf Oil, Star Sports, BoAt, Oppo. Jr. Pandya’s estimated yearly earning is estimated to be around INR 25 Crores.