How is Net Run Rate Calculated? 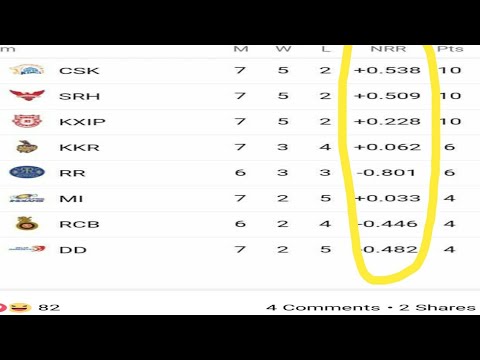 Net Run Rate (NRR) in cricket is a statistical method of analyzing and comparing the performance of a team usually during a multi-team tournament. The NRR plays a critical role to decide which team qualifies for the next round when two or more teams end up with the same number of points. In simpler terms, NRR is the cricket equivalent of “Goal Difference” in football. Goal Difference (GD) is taken into account to separate/rank two teams when they end up with the same points. Here’s a detailed look at how Net Run Rate is calculated.

For our better understanding, let’s take the example of one single game. NRR in a single game is calculated by the difference between the average runs per over scored by a team and the average runs per over conceded by them. A positive NRR means a team is scoring faster than its opposition overall. A negative-NRR, on the other hand, means a team is scoring slower than the teams it has come up against. Over the years, the NRR system has been the subject of criticism by many fans and experts alike. The Net Run Rate system only measures how quickly a team scores or concedes runs. It, however, fails to take into account the margin for victory and wickets lost.

How is Net Run Rate Calculated?

There are a number of basic equations that you must get your head around in order to be able to calculate the Net Run Rate, and they are as follows.

First, you must calculate the Run Rate of the given team. This is also known as the Runs Per Over (RPO). It is calculated by dividing the total runs scored by the number of overs faced.

In order to establish a team’s Net Run Rate, we must then take this figure and compare it to the score of the opposition. Therefore, in a single match your Net Run Rate is:

Calculation of NRR in Tournaments

Given the concept of Net Run Rate is clear, it can be put to use as a measuring stick for teams that end up with equal points at the end of a league-based tournament. Although, in this situation, the NRR is not a cumulative total of each game’s individual NRR, an average from across the entire campaign.

And that is how you calculate the net run rate of any given team. As simple as that.