The SportsLiteSports at just one click!
HomeCricketWhat are Batting and Bowling Strike Rates? How are they calculated?
Cricket 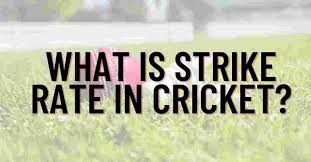 The rapidly modernizing world of cricket is ever so reliant on statistical parameters that judge the credibility of a player along with different variables. The availability of highly computerized tech makes avail all the stats and figures needed within a few clicks. Batting and Bowling Average, Economy Rate, Dot Ball Percentage, Wagon Wheels, and other parameters have all become a permanent fixture in the game. One such parameter is the strike rate, which has become a quintessential part and parcel of the game, given the rise of shorter formats like T20s and T10s. The following article provides an insightful look as to what are batting and bowling strike rates and how are they calculated.

What is Batting Strike Rate?

The Batting strike rate is defined for a batsman as the average number of runs scored per 100 balls faced. The higher the strike rate, the more effective a batsman is at scoring quickly. In Test cricket, a batsman’s strike rate is of secondary relevance to his ability to score runs without getting out. This means a Test batsman’s most important statistic is generally considered to be his batting average, rather than his strike rate. In limited-overs cricket, strike rates are of considerably more importance. Since each team only faces a limited number of balls in an innings, the faster a batsman scores, the more runs his team will be able to accumulate. Strike rates of over 150 are becoming common in Twenty20 cricket.

The strike rate is probably considered by most as the key factor in a batsman in limited-overs cricket. Accordingly, the batsmen with the higher strike-rate, are more valued than those with a lesser strike rate.

How to calculate the batting strike rate?

What is Bowling Strike Rate?

Bowling strike rate is defined for a bowler as the average number of balls bowled per wicket taken. The lower the strike rate, the more effective a bowler is at taking wickets quickly. Although introduced as a statistic complementary to the batting strike rate during the ascension of one-day cricket in the 1980s, bowling strike rates are arguable of more importance in Test cricket than One-day Internationals. This is because the primary goal of a bowler in Test cricket is to take wickets, whereas in a one-day match it is often sufficient to bowl economically – giving away as few runs as possible even if this means taking fewer wickets.

How is Bowling Strike Rate calculated?

Top five bowlers with the highest strike rate in Tests