Exclusive: Sara Tendulkar Made her modeling debut with this commercial, Watch 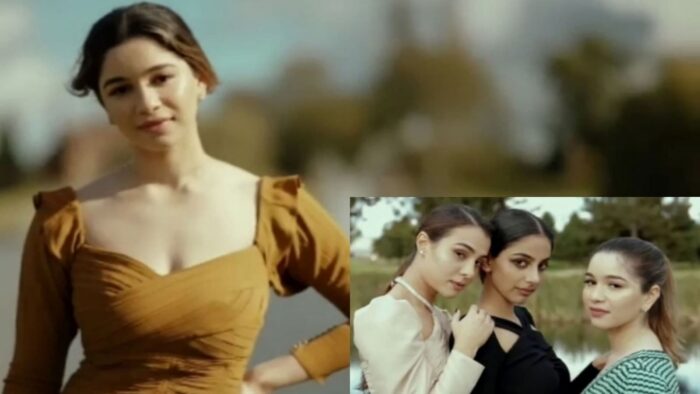 Legendary Indian cricketer Sachin Tendulkar’s daughter Sara Tendulkar made her modeling debut. The 24-year-old, who has often bowled everyone over with her fashion sense, collaborated with a clothing brand for a promotional video. Sara Tendulkar can be seen sharing screen space with Banita Sandhu and Tania Shroff in the ad. The trio could be seen sharing great chemistry on-screen and the fans thoroughly enjoyed the outcome.

Sara Tendulkar is a stunner and we all agree on that and now she has made her modelling debut. She has now made her entry into the modelling field and fans are totally excited. Sara posted an advertisement on her official Instagram account where she is seen posing for a clothing brand. The video also introduces Banita Sandhu and Tania Shroff. Needless to say, all of them look gorgeous. However, Sara Tendulkar is already a show stealer with 1.5 million followers on her Instagram handle. Her prettiness and fashion statements often make people drool over her.

In 1990, Sachin Tendulkar was just 17, when he had seen his forever love, Anjali Mehta for the first time and had fallen for her immediately. Sachin and Anjali tied the knot on May 24, 1995. They are blessed with two kids, Sara Tendulkar and Arjun Tendulkar. Sachin’s close-knit family is media’s favourite and everyone loves it when any member of the Tendulkar family shares snippets from their lives. While Sachin’s son, Arjun Tendulkar followed his father’s footsteps and decided to make a career in Cricket, his daughter, Sara took a different path as she is all set to conquer the glamour world. Sara Tendulkar Made her Modelling debut today.

Sara Tendulkar is the daughter of former cricketer Sachin Tendulkar. She did her schooling from Dhirubhai Ambani International school in Mumbai and is a graduate of University College London. Meanwhile, Banita Sandhu is a Welsh actress who works in Bollywood. In addition, she made her debut in the 2018 film October opposite Varun Dhawan. In addition, Tania Shroff is the daughter of Industrialist Jaidev Shroff and Roomila Shroff. However, she is currently in a relationship with Tadap star Ahan Shetty.

Sachin Tendulkar recently analyzed Shubman Gill’s batting skills and said there aren’t any issues with his batting technique. The ‘Master Blaster’ noted that Gill knows how to play on hard and bouncy tracks. Tendulkar feels Gill could do well on the upcoming tour of South Africa as well. However, Tendulkar wants Gill to convert his starts into big scores.