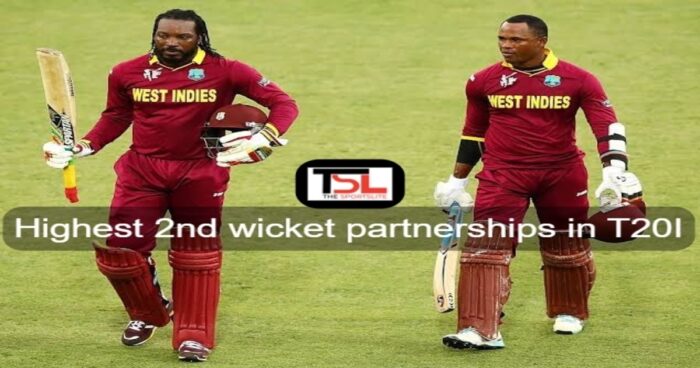 T20 cricket is slowly becoming the game of batters over time, be it domestic tournaments or Internationals. Partnerships are what we call the backbone of good scores. A partnership is very important if the team wants to put a high score on the board or chase good targets. The 2nd wicket in cricket is very important in terms of the batting order. After the dismissal of an opener, the number 3 batsman walks in to make sure the flow of runs continues. In this article, let’s discuss the Top 5 highest 2nd wicket partnerships in T20I.

Chris Gayle along with Marlon Samuels struck a 152 runs partnership against South Africa in 2015. South Africa coming to bat first gave an enormous target of 232 runs to be chased in 20 overs. Windies lost their first wicket at just 19 runs in Dwayne Smith. Although Chris Gayle along with Marlon Samuels bonded an excellent partnership of 152 runs to win the match for WI. Gayle scored an excellent 90 off just 41 balls with a strike rate of 219.51. Samuels scored 60 off 39 deliveries with a strike rate of 153.84. In the end, West Indies achieved this enormous target with 4 wickets and balls each in hand.

Ravija Sandaruwan accompanied by Adnan Idrees formed a 156 runs partnership against Qatar in 2019. Kuwait came to bat first and lost their first wicket at 35 runs. Ravija then formed an excellent partnership with number 3 batsman Adnan to maintain the run flow. Ravija scored 88 runs off 55 balls with a strike rate of 160. Adnan played an amazing knock of 80 runs off just 43 balls with a strike rate of Kuwait was able to put a target of 204 on the board courtesy of the batters. However, Qatar chased the target in the last ball and won the match by 3 wickets.

England pair Alex Hales and Ravi Bopara managed an excellent 159 runs partnership for the 2nd wicket against West Indies in 2012. England came to chase a target of 173. They lost their first wicket at just 10 runs when Ravi Bopara walked in. Hales took the baton of the English batting order in his hands and led the team to victory with 99 runs scored off 68 balls with a strike rate of 145.58. Bopara scored a steady 59 off 44 balls. England won the match at the end with 7 wickets and 2 balls remaining.

Mahela Jayawardene along with Kumar Sangakkara partnership 166 runs for the 2nd wicket against West Indies in 2010. Jayawardene scored an incredible 98* off 56 balls with a strike rate of 175. Captain Sangakkara accompanied his comrade with a supportive 68 runs off 49 balls inning with a strike rate of 138.77. Sri Lanka went on to put a tough target of 196 in 20 overs. West Indies innings collapsed at just 138 runs at the end of 20 overs and Sri Lanka won the match by 57 runs at the end.

Jos Buttler along with Dawid Malan made the highest 2nd wicket partnership in T20I to date against South Africa in 2020. Both the batsmen had 167* runs in between them. England lost their first wicket at 25 runs in their 191 run chase in 20 overs against SA. Dawid Malan came at number 3 and changed the whole game for England. He scored an unbeaten 99* off 47 balls with a strike rate of 210.64. Buttler on the other side scored 67 runs off 46 balls with a strike rate of 145.65. England chased this difficult target quite easily with 9 wickets in hand and 14 balls still remaining at the end.