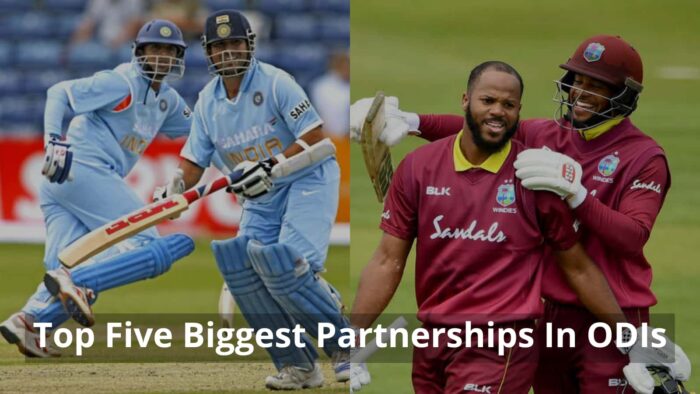 It is often said that if you want to win in cricket, then your team has to make some good partnerships to win the match. Which is absolutely true, because it has been seen in the history of 140 years of cricket, that the team with good partnerships often edges out the opponent. There have been five occasions in the history of men’s ODI cricket when two batsmen together have scored more than 300 runs. Among the top five biggest partnerships of ODIs, two partnerships from India in this list. And the noteworthy fact is that Rahul Dravid was a part of both the innings. While the West Indies batsmen have grabbed the top two spots, read the complete article to check out the top five biggest partnerships of ODIs.

Even though the Indian team could not get a place in the Super Six in the 1999 World Cup, but Sourav Ganguly and Rahul Dravid batted wonderfully in this World Cup. Ganguly and Dravid notched a mesmerising partnership of 318 runs for the second wicket against Sri Lanka in the match played in Taunton. Ganguly scored a career-best 183 runs in this match, while Dravid scored scintillating 145 runs while scoring all round the park. In reply, Sri Lanka’s team scored 216 runs for the loss of all wickets. This partnership is till date ranks fourth among the top five biggest partnerships of ODIs.

The record for the third highest partnership in ODI cricket is held by none other than “God of Cricket” Sachin Tendulkar and Rahul Dravid. On November 8, 1999, against New Zealand in Hyderabad, both these batsmen had a partnership of 331 runs, which was also a world record for a long time. This match turned out to be a nightmare for the Kiwi bowlers. In this match, where Rahul Dravid surged to 153, while Tendulkar, on the other end, played an unbeaten innings of 186 runs. India posted a mammoth score of 376 runs for the loss of 2 wickets and New Zealand’s team in reply could only manage 202 runs for the loss of all wickets.

Also Read: 5 Players With Best Bowling Figures In T20Is – 2 Indians Made The Cut Into This List

West Indies openers John Campbell and Shai Hope created history by sharing a 365-run partnership against Ireland. Their partnership is till date the highest partnership for the opening wicket in ODI cricket and the second highest for any wicket. Both the batsmen batted fiercely and did not give any chance to the Ireland bowlers. John Campbell smashed 179 in 137 balls and Shai Hope scored 170 runs in 152 balls. However both the batters fell in the same over. But till then they had placed their team in a comfortable position. Subsequently West Indies won the match by 196 runs. This partnership features at second position in the top five biggest partnerships of ODIs.

The paramount of the top five biggest partnerships of ODIs is yet again made by a Caribbean pair. West Indies’ explosive batsman Chris Gayle and Marlon Samuels created history in the 2015 World Cup, scoring 372 runs for the second wicket against Zimbabwe. Which is the highest partnership for any wicket in ODI cricket history. In this match, Gayle hammered 215 runs in 147 balls, which was the first double century in the World Cup. While Samuels played an innings of 133 runs. Notably, the African side were off to a great start. Tinashe Panyangara dismissed Dwayne Smith on the second ball of the innings. However, they couldn’t capitalize on the start. And eventually West Indies beat Ireland comprehensively by 73 runs in this match.