The SportsLiteSports at just one click!
HomeCricketRohit Sharma and Rahul Dravid Press Conference ahead of India vs New...
Cricket 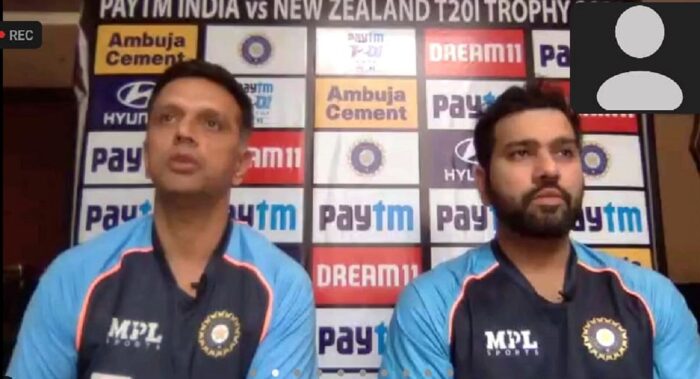 A Journalist asked Rohit Sharma about change in the template in the White Ball Cricket. He answered that template is an important thing and they are very good at that. It is the other thing that India haven’t won the ICC tournament. Rohit also added that India are not going to follow any other team’s template. They have to create their own template.

Role as a coach

A question being asked from Rahul Dravid about his job as a coach. He simply answered that they can’t overlook to keep an eye on the future. But they also want to win each and every game. But the main job is to build a brilliant team for the future. In that course if India lost a couple of matches that is manageable. His roll will be more of a builder kind of a person where he builds a team for the future.

Rahul Dravid sees this as an opportunity to coach a senior Indian team. He told that he knows the fact that there is a difference in coaching both these teams. But some coaching strategies remain constant with every team. Also, he believed that the main responsibility of a coach is to get out the best of the players and mold yourself according to the players.

Now, Rohit talked about Workload Management. He briefed that these players are not machines. They need rest to be able to be fresh. Also, he thinks that this break is necessary for players to be fresh. In addition to this, Rahul Dravid added that India is not the only team to do so. New Zealand, also, in this series are resting some of their players for this series.

A Journalist asked Rohit Sharma about the role of Virat Kohli as a batsman. Rohit answered that the role remains the same. There is no difference. He added that Virat is a key player for team India and always add value to the team and always a team man. He believes that when Virat returns to the squad, he adds more value to the team.

These were all the topics discussed by Rohit Sharma and Rahul Dravid in the press conference ahead of India vs New Zealand T20Is series.