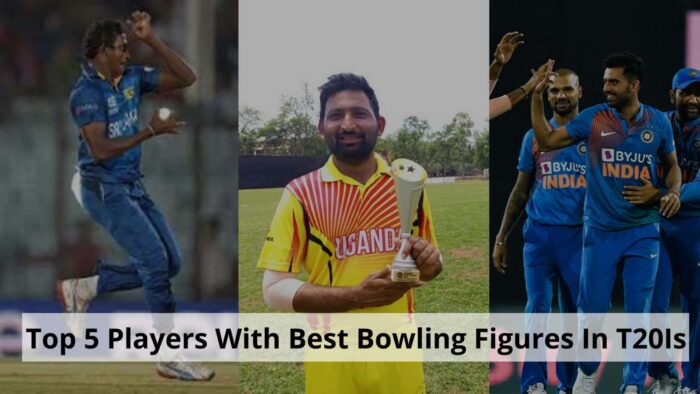 Cricket has always encountered changes, modifications, and upgrades like anything else. However, one of the most compelling and engaging ones is the induction of the T20 format. Since its dawn in 2003 by the ECB, it has turned out to be the root of a lot of bickering in the world of Cricket. Nevertheless, it has significantly changed the whole scenario of the game in many aspects like cricketing abilities, skills, platforms for the budding players, and of course financial boons to the players. This format has perfectly taken care of the declining fan enthusiasm in the game. It has elevated the crowd attendance by some thrilling and nail-biting finishes. T20 cricket is primarily considered a batsman’s game with no offense to the bowlers. However, some bowlers have left their mark on the pitch. This feature, will look at the top 5 players with best bowling figures in T20Is.

Sri Lanka played Australia in Kandy in August 2011. Sri Lanka batted first and scored a decent 157/9. Replying, Australia were restricted to 149/9 by virtue of Ajantha Mendis’s figures of 6 wickets for 16 runs in 4 overs. Mendis made the ball talk and made optimum use of the Kandy track which was assisting a bit of spin. He took wickets at regular interval and his victims included Watson, Warner, Shaun Marsh, Smith, Haddin and Johnson. In the process, Mendis broke the previous world record set by Umar Gul in 2009. Mendis made the best use of his 24-ball spell and helped Sri Lanka beat the mighty Kangaroos by 8 runs in a close contest.

Veteran Sri Lankan spinner Ajantha Mendis features twice in the list of top 5 players with best bowling figures in T20Is. In a group match of the ICC World T20 tournament in Hambantota in September 2012, Sri Lanka faced minnows Zimbabwe. Sri Lanka batted first and scored 182/4. In reply, Zimbabwe struggled to contain the bowling onslaught from Sri Lanka and were bowled out for 100 in 17.3 overs. Sri Lanka’s right arm off-spin bowler Ajantha Mendis ripped apart Zimbabwe’s batting line-up with his mysterious deliveries as Sri Lanka had the command throughout the contest. He took 6 wickets for 8 runs in his stipulated 4 overs, including the scalps of Sibanda, Taylor, Mazakadza, Chigumbura, Utseya and Jarvis. In the process, Mendis broke his own then-world record that he had set in August 2011. Riding on his brilliance, Sri Lanka registered a massive win.

Dinesh Nakrani is an India-born cricketer who has represented Saurashtra in the past. He now plays for Uganda Nation Cricket Team. He achieved the feat against Lesotho and the match was a part of the ICC T20 World Cup Sub Regional Africa Qualifiers. The Gujarat-born pacer ripped through the Lesotho batting lineup, taking 6/7 in his quota of four overs. Lesotho won the toss and decided to bat first. The decision came back to haunt them as Nakrani wreaked havoc and ran through their batting order. None of the batsmen managed to get into double digits, apart from skipper, Samit Patel. The Ugandan bowlers skittled out Lesotho for a mere 26 before the openers completed the formalities in just 22 balls. Nakrani rightfully was adjudged Man of the Match for his surreal bowling.

In the 3rd match of the T20I series on Bangladesh’s tour of India in Nagpur in November 2019, the hosts decided to bat first. The Nagpur pitch seemed good for batting as the home team posted 174/5 while batting first. However, things were different in the second innings. At one stage, Bangladesh was comfortably placed on 110 for 2 in 13 overs, racing towards the target swiftly. Indian seamer Deepak Chahar caused Bangladesh’s collapse by taking 6 wickets for 7 runs in 3.2 overs. Chahar bowled a sensational spell and the Bangladeshi batters looked clueless on how to tackle his swing and accuracy. His wickets included opener Liton Das and top-order batsmen Soumya Sarkar and Mohammad Mithun. His last three victims were lower order batters Aminul Islam, Shafiul Islam and Mustafizur Rahman. Chahar’s bowling figures set a then world record which earned him the Man of the Match award.

Surprisingly enough, or maybe not, a Nigerian Bowler tops the charts of top 5 players with best bowling figures in T20Is. Aho’s raw pace, unerring yorkers, and hurling bouncers at pace have earned him the nickname, Archer. Akin Jofra Archer, Peter’s love for his stock ball i.e. the yorker is ineffable. Aho achieved the feat against Sierra Leone in October 2021. Aho produced a sensational spell claiming better of 6 Sierra Leone batters in 3.2 overs conceding 5 runs. The pitch seemed difficult to bat on as Nigeria, winning the toss and electing to bat, put merely 90 runs on the board. But not before the 18-year-old Nigerian prodigy rose to the occasion to hand his team a memorable victory.