Watch! 5 Most Emotional moments in Cricket History which made everyone cry 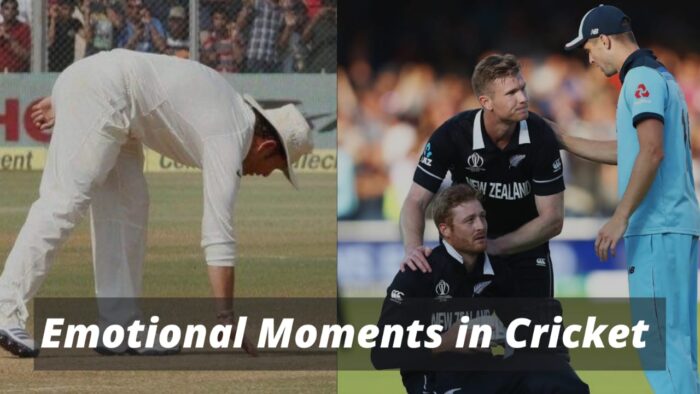 Sports, in many ways mirrors the reality of our lives. Emotions run high, and the desire to succeed burns like a flame in players. Cricket, by no means, is an exception. Much like any other sport, the game if cricket also has it’s own emotions and sentiments attached to it. When they say that cricket is not just a game, its an emotion, they mean it. The level of competitiveness in cricket has reached such great heights, that both the sides give it their all. In such a case, ending up as the second best is no compensation to their tough grind. But transcending the disappointments of “just a loss”, several incidents have happened in cricket which will remain etched in the annals of the sport forever. In this feature, we will look at 5 most emotional moments in cricket history that made everyone cry.

Always considered as out-of-towner, Bangladesh was just a whisker away from snatching one of the most premiere cricket tournaments. But their dreams were shattered in the finals in the most unfortunate way possible. This was their best chance as the finals was played in Bangladesh itself with the home condition and the local support. During the group stage, they had already beaten India and Sri Lanka. Pakistan batted first in the final. Bangladesh bowled really well and kept Pakistan to 236 runs banking on some good contributions down the order from Afridi and Sarfaraz Ahmed. The final went till the last ball of the game, with Bangladesh needing 4 runs to lift their first-ever major trophy. Unfortunately, it didn’t happen as they fell short by 2 runs. The Bangladeshi players were seen in tears. The entire nation flooded with tears that day.

The 2019 World Cup Final stands among one of the most controversial matches ever played in the history of cricket. The overthrow in the last over had no fault of the Kiwis as it deflected from Ben Stokes’ bat. But New Zealand had to pay the price for that as the match got tied. That overthrow in the final over proved to be the decisive factor. The super over also saw both teams failing to better other and scored equal runs.

However, on the basis of the controversial boundary count rule, England was adjudged World Champions. Every cricket fan felt the agony of the Kiwis as they lost the match to luck by the barest of margin. Despite all this, Kane and company did not make any controversial comments and maintained their sportsman spirit. However, a few players of the Kiwi side couldn’t hold back their tears and broke down on the pitch.

End of the road for God of Cricket, Sachin Tendulkar. On October 10, 2013, Master Blaster announced that the upcoming series against West Indies would be his last International appearance. The entire month of October assumed the form of an emotional affair, not only for Indian fans, but for everyone worldwide. Indian Team without Sachin? It was beyond the wildest dreams. On 15 November 2013, Sachin was dismissed for one last time in International Cricket. In that inning too, he displayed his class and scored a half century. A perfect swansong for fans. Next day itself, India won the match and then came the most emotional moment, Sachin’s farewell speech. His 17-minute speech made every cricket lover cry. The man who served the Indian cricket for more than two decades, bid adieu to the game. Sachin’s adieu to cricket is definitely one of the most emotional moments in cricket.

Yet another match featuring New Zealand ended in a heartbreak. However, this time the ecstatic Kiwis were on the winning side and the Proteas with absolute torment. New Zealand needed 5 runs to win from two balls. And Grant Elliot sent the ball soaring to the stands and sealed a memorable victory for the kiwis. This match saw many South African legends like Dale Steyn and Morne Morkel crying. Being the fan favorites, people could relate to the distraught of South African players, especially the modern day legend AB de Villiers. The disheartening portrait of AB de Villiers and grief-stricken Proteas finds this match a place among most emotional moments in cricket.

I know it’s crazy but I want to see his face pop around the corner. Is this what we call the spirit ? If so, then his spirit is still with me and I hope it never leaves.

The Black Day of Cricket, November 27, 2014. It was in the Sydney Cricket Ground and Phil Hughes was batting on 63 not out. Who knew he will be batting on 63 forever after this accident! A lethal bouncer from New South Wales bowler Sean Abbott struck the neck of Phli Hughes after missing an attempted hook shot. Hughes was wearing a helmet, but the ball struck an unprotected area just below his left ear. He collapsed before receiving mouth to mouth resuscitation and was subsequently taken to St Vincent’s Hospital, Sydney, where he underwent surgery and was placed into an indiced coma. On the morning of 27 November 2014, Hughes died, succumbing to his injuries, three days before his 26th birthday.

Phil had shown glimpses of a great early in his career but an unfortunate incident ended not only his career but also his life. His death sent shockwaves all over the world. A ‘little brother’ to Michael Clarke, who delivered a powerful eulogy at his funeral, an event televised across Australia and watched by thousands on big screens at the SCG and Adelaide Oval. This incident definitely made a million of cricket fans weep. His demise was the most disheartening incident that could have happened to Cricket. An immeasurable loss for the entire cricketing fraternity. That 63* will be remembered to all till eternity.

The history of cricket is brimmed with moments of emotions, heartbreak, and respect. In this feature, we tried to jot down the 5 most emotional moments in cricket. However, these may differ from person to person. No offense to anyone if your moment of “emotion” couldn’t be featured.