Top 5 Lowest T20 Scores by India of all time 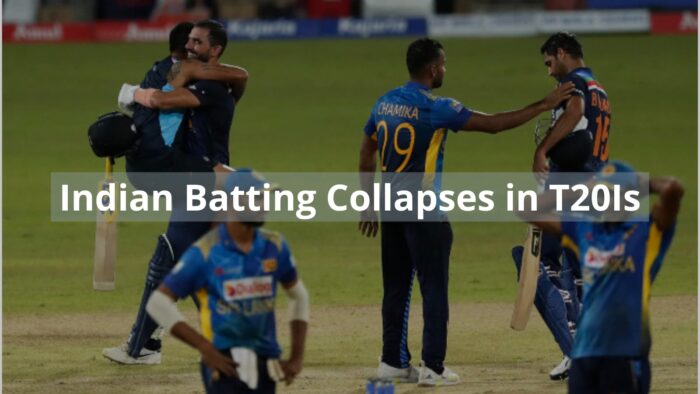 It is quite paradoxical that cricket, one of the oldest sports in the world, is now gaining popularity across the world through shorter formats rather than its original and older version, Test. During its birth in the early 2000s one could have imagined that T20 cricket will become more global. National and club teams around the world were piling huge totals and chasing targets that earlier seemed not at hand. In this era of explosive hitting and short-sighted batting style, it sometimes happens that teams end up with scores much lower than the target. Although a rare sight, but bowlers also get their say sometimes in this format. In this article, we will look up at top five lowest scores by India in T20Is of all time.

On February 9, 2016, the Indian batting toppled on Pune’s green top. Kasun Rajitha, Dushmantha Chameera and Dasun Shanaka – Sri Lanka’s lanky seam-bowling labour force – came up with a thoroughly surprising lethal attack on green Pune deck. The misery of the star studded Indian batting can be gauged by the fact that Ravichandran Ashwin top scored for them with 31 runs off 24 balls. The completely unheard of Sri Lankan seam attack delivered an immaculate fast bowling display, seaming the ball sharply away from right-handers, and generating fine pace and carry. Kasun Rajitha rightly won the Man of the Match award, on his debut. His analysis read 3-29 in his four overs. Rajitha sent the Indian top order back to pavilion inside the powerplay. And this match latches onto the fifth position of top five lowest scores by India in T20Is of all time.

The Twenty20 format of cricket is known as batters format. This format sees bowlers being sent soaring for boundaries. The match on October 5, 2015 saw South Africa bundling up the Indian team for their then second-lowest T20I total. This match marked the return of South African all-rounder Albie Morkel’s comeback to the team for his 50th T20I, after an absence of 18 months. He starred with the ball with a career-best haul of 3 for 12 and subsequently won Man of the Match. The Indian team succumbed to several soft dismissals and showed none of the temperament required to score runs on such frozen-over surface of Cuttack. None of the Indian batters could score with a strike rate of over 100. South Africa sailed to the target swiftly and completed the chase in 17.1 overs.

A second-string, as called by Sri Lankan WC winning captain- Arjuna Ranatunga, Indian team toured Sri Lanka in July 2021 amid the COVID-19 scare. This was the 3rd and final match of the T20I series with the series squared at 1-all. The Covid-hit Indian team was forced to field their only possible XI. On his birthday, Wanindu Hasaranga helped Sri Lanka restrict India to their third lowest T20I total of 81/8. A severely depleted India line-up hobbled to an inadequate 81 for 8 in their stipulated 20 overs. Star leg-spinner Hasaranga terrorised Indian batters right through his four overs, picking up 4 wickets for merely 9 runs. Rahul Chahar with the big spin he generated with his legbreak, gave a feeble sniff to the visitors. But eventually, it was not enough and SL chased down the total with sheer ease and took the series.

15 March 2016, the T20 World Cup was being played in India. Kane Williamson won the toss and decided to bat first. But what caught everyone’s attention was the playing XI. Having left out their proven premier fast bowlers Trent Boult and Tim Southee, New Zealand gambled with three spinners. Meanwhile, the Indian bowlers did a splendid job by restricting the Kiwis for 126/7. This seemed a smooth sailing for the hosts. But, to all the popular beliefs, the Kiwi spin trio routed India on raging turner. The unpredictable happened and the Indian Team lost wickets at regular interval and got all out for merely 79. MS Dhoni top scored with run-a-ball 30.  The spin triplet of Nathan McCullum, Mitchell Santner and Ish Sodhi to clocked in for duty and shared 9 wickets among them.

Nerely four months after India were crowned the world champions, they crashed to a humiliating defeat against Australia at the MCG. The only T20 match played on the 2008–09 Australian Tour. Team India barely showed the stuff of world’s best Twenty20 team. Nathan Bracken spearheaded the bowling with three wickets. The Australian bowlers did not let MS Dhoni’s India breath easily. The fall of wickets ensued and the entire team was bowled out for 74 in 17.3 overs. This inning leads the top five lowest scores by India in T20Is of all time. Irfan Pathan was the only batter to reach double digits. In reply, Australia chased down the target in just 11.2 overs for the loss of 1 wicket.