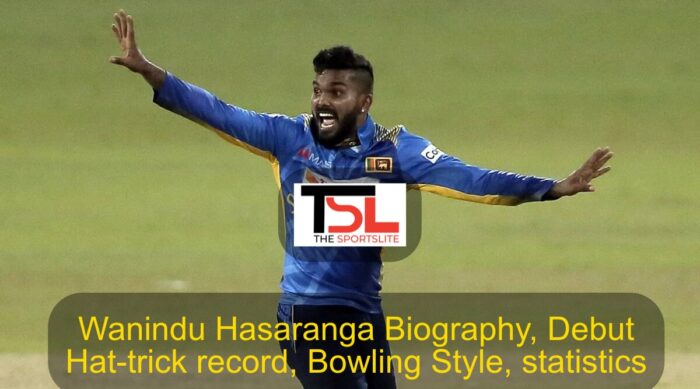 The young and energetic leg spinner has become one of the hot topics in the cricketing world after his act of brilliance throughout India’s tour of Sri Lanka in 2021. On one side, India was battering the other Sri Lankan bowlers and on the other side, Wanindu Hasaranga kept the batsmen on their toes throughout the tour. The performances in this tour did help him immensely as he has been picked by RCB for the 2nd leg of IPL 2021.

Rising through the ranks

29th July 1997 was when he was born in Galle. He has had an excellent run throughout his domestic career. He is a genuine all-round cricketer. Terrific fielder, reliable batsman, and a wonderful leggie.

The three-dimensional player made his ODI debut against Zimbabwe on 2nd July 2017. The journey towards excellence started just there as he took a hat-trick in his debut match. This feat made him the only third debutant to take a hat-trick in ODIs. He also became the youngest to take an ODI hat-trick and first leg spinner to do so.

His performance As a batsman

Though Hasaranga’s innings of 44 off 34 wasn’t enough to take Sri Lanka over the line in T-20I against West Indies, the innings did exhibit his abilities with the bat as well. 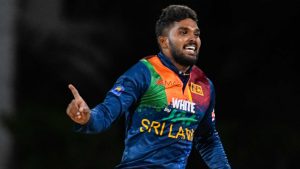 The test debut came on Boxing Day 2020 in South Africa. He took four wickets and in the second innings scored his debut half-century.

India had sent their B team to Sri Lanka for limited-overs fixtures, but Hasaranga’s superb and tight spells are no lesser as he put India in a spot of bother frequently. Indians couldn’t pick the difference between leggie and wrong’un. He almost led them towards a crucial win in 2nd ODI with his 3-37(10), but India’s Deepak Chahar with the bat in hand stole the attention from him and registered a win for India out of nowhere.

Wanindu Hasaranga – the best bowler in India vs SL series, 2021 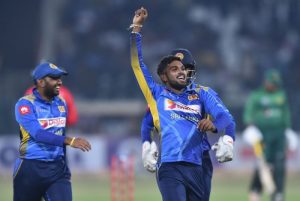 In the last T-20 of the series, the Sri Lankans restricted India’s power hitters and sloggers for just 81 runs in 20 overs. The wrecker in chief was Wanindu Hasaranga. The fiery spell of 4-0-9-4 reduced India to just 81 runs. Batsmen never read him or rather he never allowed batsmen to read the grip of the ball. It is not only about the four-wicket balls, but throughout the 4 overs, he kept fooling the batsmen with a subtle change of pace, flatter trajectory, and googlies. Sri Lanka comfortably won by 7 wickets with 33 balls to spare and also pocketed 3-match T-20 series by 2-1.

This series win means the world to Sri Lanka cricket as it has been going through turmoil. Injuries, corruption, politics, lack of inexperienced players have done no good. But there is a light at the end of the tunnel and Hasaranga is one of many who could lead Sri Lanka out of this tunnel to a much brighter future.

He is the future of Sri Lankan cricket

Sri Lanka needs gritty characters with all-around abilities and Hasaranga is a prime example of them.

Best wishes to Sri Lankan Cricket and Wanindu Hasaranga. We hope many like Hasaranga would come in and bring back the days of glory to Sri Lankan cricket.