The SportsLiteSports at just one click!
HomeCricketRead Why World Test Championship (WTC) qualification is unfair for final by...
CricketForever Facts

Read Why World Test Championship (WTC) qualification is unfair for final by ICC ? 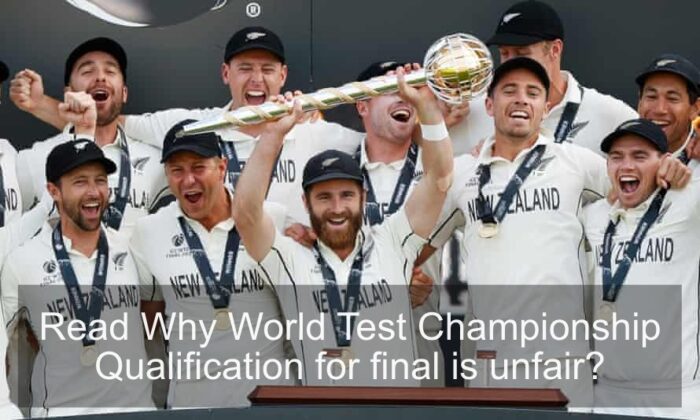 Why World Test Championship (WTC) qualification for the final by ICC is unfair and needs to be changed? Is just one match for the final is okay for this big event or there should be more matches to find out the champions?

Today, we are trying to analyze this whole system.

World Test Championship (WTC) is a tournament for which there have been so many opinions over the years and so many cricket fans wanted this to happen. WTC (World Test Championship) is a Test cricket championship that was introduced by ICC post-2019 world cup. So many actives as well as past cricketers often debated for a tournament like WTC for the oldest form of cricket (Test Cricket). WTC currently is being played between 9 teams over the course of 2 years. The first edition of WTC took place in 2019-2021 which got completed in June 2021 with the final between India & New Zealand. New Zealand won against India by 8 wickets in a rain-affected final at The Rose Bowl, Southampton. The problem was that despite winning more matches than New Zealand, England and Australia couldn’t qualify, and had they qualified on the basis of matches won by them, the question would arise whether all teams getting equal opportunities to reach the final? Let’s have a look at what better alternatives could have been adopted by ICC.

The format of World Test Championship (WTC) reads as every team is to play six test series (3 Home & 3 Away) over the period of 2 years. Each series must have a minimum of 2 Test matches or a maximum of 5. The number of matches played by each team may or may not be the same at the end of the World Test Championship (WTC) timeline but all the teams would have played six series. This format raised a lot of questions in fans as well as ex-cricketers as the number of games are different for all the teams and qualification for the finals also don’t suggest equal opportunities for all the teams as qualification is done on basis of percentage of matches won and not based on the percentage of series won by the team. Initially, ICC decided to play final between the top 2 teams who won the highest number of matches but somehow due to lots of differences in the number of matches amongst the teams, ICC changed qualification for the final to win percentage from the highest point-getters.

There was also a question raised about whether the final should be a one-off decider match only or should have a minimum best of 3 to decide the winning side. However, ICC doesn’t seem to be much worried about all these questions and has decided to move on with the same format for the 2nd edition of World Test Championship (WTC) which is to kick off from 5 matches Pataudi Trophy between England and India in England commencing from August 4, 2021. The schedule of the 2nd edition of World Test Championship (WTC) is as follows:

In the 2nd edition of World Test Championship (WTC), England is going to play the most number of matches (22) followed by India (19) while Bangladesh will play the least number of matches (12). Even though the qualifying scenario remains the same with the highest win percentage, it doesn’t seem fair with regards to the number of matches that are bound to take place. This format does require a lot of changes but a couple of them and probably most important being: 1) All teams should be playing an equal number of matches during this period and 2) All teams should be playing against each other to come on the top of the table. In case if ICC is not able to manage that way and it is not possible to organize a same number of matches for all the teams, they should change the qualification to be the finalist of WTC by deciding the most number of series winners should play the most important final. This way at least all teams get an equal chance as they place a same number of series (six series each).

However, ICC has decided to move forward with the same format as the inaugural edition for now. We do hope to have logical changes and equal opportunities for all the participating teams going forward.

Another important question also took place while the final match of the 1st edition whether it is fair to have just a one-off decider to find out the champion of this mega event or there should be multiple match events?

Well in this regard, We at The SportsLite believe that one off the decider is fair enough to decide the winners of the World Test Championship (WTC) as teams to play final are decided upon their match performances and not on series performances. They get a win percentage on the basis of each match they win even they end up losing the series. So one-off the decider is not a wrong thing with the current format but if by any chance ICC decides to follow on the series matrix then the final also should take place in the form of series which could be a minimum of 2 or a maximum of 5 matches between table toppers.

Thank you for giving the time to read this article.