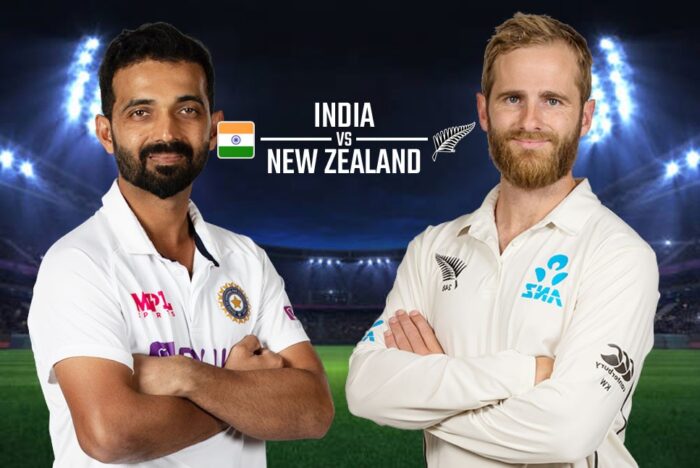 After whitewashing the Kiwis in the T20I series, India is set to square off against their formidable rivals New Zealand in the longest format of the game. The Indians were left with a sour taste in their mouths after they fell short in the final hurdle of the World Test Championship 2021. With a home series against a Kiwi side on the horizon, Ajinkya Rahane’s men couldn’t have asked for a better opportunity to seek retribution. Both the sides look fresh and ready for the two-game series which kicks off at the Green Park in Kanpur on Thursday. The following article is a detailed preview of India vs New Zealand 1st Test Match.

The two heavyweights have locked horns in 59 test matches with their first encounter happening over half a, the ‘Men in Blue’ have a superior head-to-head record with 21 wins. On the other hand, the Kiwis have won 12 matches while 26 Tests have ended in a draw. However, when the track record of both sides is taken into due consideration, New Zealand is not even close to matching with its Asian rivals. In the 34 matches they’ve faced off in India, New Zealand has emerged with the winner’s share of the purse on just two occasions. India won 16 of those encounters while the same number of matches ended in a draw. The Blackcaps haven’t beaten India at their home soil since 1989 as Williamson and his men gear up to the challenge.

Ajinkya Rahane has been walking on thin ice following his dismal run with the bat as of late. Rahane averages under 20 in the 19 innings he’s played since 2020 and has been a real liability for the Indian side. Critics and experts have gone as far as questioning his selection in the squad, let alone him leading the Indian contingent. With Virat being added to the squad in the 2nd Test, the Mumbai-born has to justify his selection with a special knock as his career stands at its twilight. With KL Rahul out with an injury, it is almost certain that either one of Shreyas Iyer or Suryakumar Yadav is set to make their test debut. Given Rahane’s hot and cold form, they can cash in on the opportunity and seal a spot in the Test squad.

On the other hand, all eyes would also be on Kane Williamson as he continues to carry on his purple patch. With India’s bowling looking as formidable as ever, Williamson’s skill and perseverance will be tested to their fullest.

New Zealand crushed the hearts of millions of Indian fans again after their triumphant victory in the World Test Championship Finals. Despite both teams lacking the services of their key players like Virat Kohli, Trent Boult, Jasprit Bumrah, KL Rahul, and many others, the series promises to be a riveting contest between the two best test sides at world cricket at the moment. The last time both the sides locked horns against one another in a series, New Zealand mopped the floor with India with a 2-0 series win in 2020. After a solid performance following the WTC finals in the tour of England, the men-in-blue would love to keep their winning ways given that it’s their turn to have the home-field advantage.

Ravichandran Ashwin has an average of 133 match fantasy points in the last 10 games, a fantasy rating of 9.9, and a low XFactor.

Kane Williamson has an average of 126 match fantasy points in the last 10 games, a fantasy rating of 8.7, and a medium XFactor.

Cheteshwar Pujara has an average of 60 match fantasy points in the last 10 games, a fantasy rating of 8.2, and a medium XFactor.

Mitchell Santner has an average of 71 match fantasy points in the last 10 games, a fantasy rating of 8.2, and a medium XFactor.

Umesh Yadav has an average of 100 match fantasy points in the last 10 games, a fantasy rating of 8, and a low XFactor.