The SportsLiteSports at just one click!
HomeCricketWill Virat and co. be able to finally get an edge over...
Cricket

Will Virat and co. be able to finally get an edge over the Kiwis? India vs New Zealand 2nd Test Preview 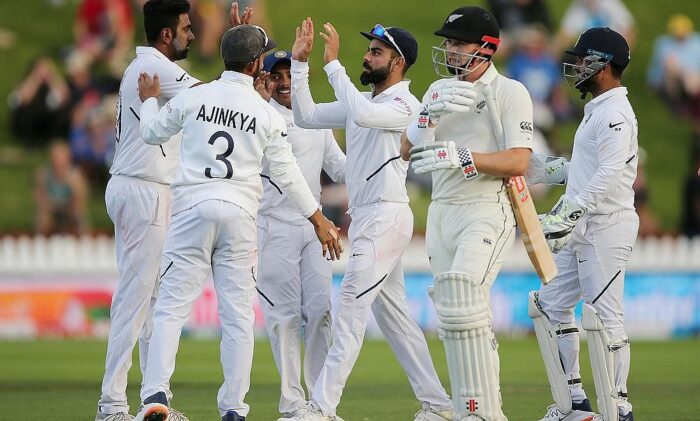 After a riveting contest that saw both sides fight tooth and nail to gain the edge over their opponents, India and New Zealand are set to lock horns once again in the second and final test of the 2-match series. The fate of the Paytm series hangs in the balance as both teams gear up for the decider at the Wankhede. The Indian contingent will be bolstered with the arrival of their first-choice skipper Virat Kohli as the men-in-blue gear up to face their toughest test. The following article is a detailed preview of India vs New Zealand 2nd Test Match.

Who will Virat Kohli replace?

The biggest question coming out of the first test was who was going to be replaced by the incoming Virat Kohli. One would’ve easily sided with the newcomer Shreyas Iyer but scores of 105 and 62 in the first and second innings respectively may give him some breathing room. Ajinkya Rahane looks the most vulnerable among his crewmates as the 33-year-old has had quite a downward spiral in the year 2021. Batting primarily as a middle-order batter, Rahane averages just 19 in the 12 test matches he’s played this year. To give you a context of that, Ravichandran Ashwin, whose primary role is that of a spinner who bats at number 8, averages 31 in 2021.

Rahane has been the subject of criticism for quite a while now with experts and fans alike as he’s continued to be a part of the starting XI despite being out of touch. Things aren’t looking the best for opener Mayank Agarwal as well as he hasn’t had the best of runs in the longest format of the game in 2021. If India decides to rest Wriddhiman Saha and play KS Bharat, the wicket-keeper batter may be shot up the order and asked to open as he has proven to be a sublime red-ball opener in the domestic circuit. Kohli may replace either Mayank or Rahane while India can continue to play with their usual format of 5 batters and a keeper alongside 5 bowlers.

Virat Kohli’s inclusion in the Indian dressing room will surely strengthen the Indian batting unit which looked a tad lose in the first game in Kanpur. Having not scored a century-plus score in over 2 years, Virat has the perfect opportunity and the perfect opponent to achieve the feat that has kept him waiting for 2 years. Wankhede’s red-soil surface is often considered a batting haven and the recently turned 33-year-old would very much like to capitalize on that. All eyes would also be on Shreyas Iyer who won over fans and experts alike with his beautifully knitted innings in his maiden Test. Iyer lit up the Green Park with some magnificent shots and now that he’s back playing in the ground he grew up on, Iyer has the perfect opportunity to score some runs and seal his spot in the middle order.

New Zealand’s Kyle Jamieson has been the thorn in the eyes of the indomitable Indian batting unit as the pacer has been troubling them since his debut series back in 2020. Jamieson was sensational with the ball in the first test and given the bounce and seam the Wankhede surface has on offer, the tall-lanky cricketer from Auckland must be licking his lips.

Axar Patel has an average of 204 match fantasy points in the last 4 games. In addition to this, a fantasy rating of 10, and a low X-Factor.

Kyle Jamieson has an average of 146 match fantasy points in the last 9 games. In addition to this, a fantasy rating of 9.9, and a low X-Factor.

Tim Southee has an average of 119 match fantasy points in the last 10 games. In addition to this, a fantasy rating of 9.3, and a low X-Factor.

Tom Latham has an average of 87 match fantasy points in the last 10 games. In addition to this, a fantasy rating of 8.9, and a low X-Factor.

Ravichandran Ashwin has an average of 153 match fantasy points in the last 10 games. In addition to this, a fantasy rating of 8.9, and a low X-Factor.

King Kohli’s men have conquered the competition and waivered the Indian flag all around the world but New Zealand remains the only hurdle they fail to clear. Will history repeat itself or will India, spirited with a change in leadership, finally be able to overcome the demons of its past and topple its Kiwi rivals? Who’s going to come out on top? Our guess is as good as yours. Expect a slow-burner of a contest that gains steam as the players toil hard in between the 22-yards.