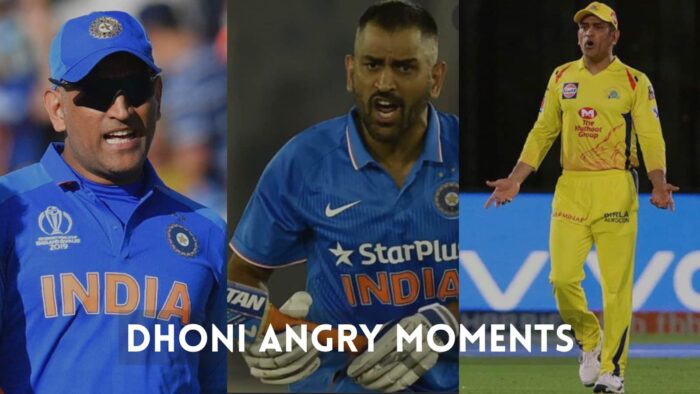 MS Dhoni has had a career that almost anyone would envy. Named among one of the best captains this world has ever seen, MS Dhoni’s calmness is his biggest strength. Whatever be the situation, he maintains his poker face. He is rightly bestowed the tag of Captain Cool. His composure and conduct is a life lesson for masses. His attitude towards the game, the calculations in the mind, the confidence in his players and the mental alertness is what keeps him going. Be it a tense pressure situation, or administering seniors in the team, Mahi has managed to do all with ease. He has rarely displayed his emotions on the cricket field. However, there are some odd occasions when Captain Cool lost his calm. In this article, we will look at 5 instances when MS Dhoni lost his cool.

This incident took place back in 2012 during the famous CB Series. The same match which saw the supremely calm MS Dhoni guiding India to victory in the second innings saw his mercury going up in the first innings against Australia. The incident took place when Mike Hussey was stumped by MS Dhoni off the bowling of Suresh Raina. Just when Hussey was trudging back to the dressing room, umpire Billy Bowden called him back out of some misunderstanding. This didn’t go well with the Captain Cool as he got indulged in an argument with Umpire Billy Bowden about the whole issue. The matter resolved once it’s been clarified that the third umpire adjudged Hussey as out in a goof-up. Although things were meant to go normal lately. But Dhoni didn’t look happy with the kind of umpiring displayed by two of the most experienced umpires in International cricket.

Dhoni, who is known for his cool and calm demeanor on the field was allegedly caught abusing Manish Pandey for poor running. In the Centurion T20I against the Proteas in 2018, a rarest of the rare event was witnessed by fans when the former India captain abused Manish Pandey for lack of attentiveness. Pandey hit a shot towards mid-wicket and ran for a single. Dhoni, who is very quick between the wickets, was looking for a double. MS was clearly angry and he snapped at Pandey, for his lack of concentration in the middle. He yelled angrily at Pandey to look at him while he is batting and apparently said, “Oye! Bho*&I$# Idhar dekh le. Udhar kya dekh raha hai?” ( Hey! Bas*&$d Look here. Why are you staring over there).

Interestingly enough, MSD’s shocking remark was picked up by the stump mic at the time and while many did not notice the scene, a video of the same went viral on social media after the match ended. This event marked one heck of a moment when Dhoni lost his cool.

3) Deepak Chahar was scolded by Dhoni

During the 2019 IPL, in a match against the Punjab Kings (then, King XI Punjab), Deepka Chahar became the rare victim of Captain Cool’s anger. The reason was Chahar’s two back-to-back horrifying no balls. The Punjab franchise needed 39 runs off 12 balls when Dhoni handed the ball for the 19th over to Chahar. Chahar started off his over with an above-the-waist no ball to Sarfaraz Khan who smashed the pacer for a four. On the next delivery, Chahar repeated the same mistake again. Trying to bowl a slower one, he ended up bowling another beamer above the waist and conceded two runs.

This shot the mercury up for the captain cool. Watching Deepak losing focus, an angry Dhoni ran upto Chahar and was seen talking to him in an animated fashion. His stern talk seemed to have brought Chahar back on track. He bowled two yorkers and uprooted David Miller’s stumps with the last ball of his spell. “Dhoni bhai was very angry with me. It was a big mistake that I made. He said a lot of things. Honestly, at the back of my mind, I was thinking ‘what to bowl next?’,” Chahar told TOI after the match.

Pacer Khaleel Ahmed too was not spared by Mahi’s wrath, even after not being in the Playing XI. During the 2019 ODI series between India and Australia, in the second ODI at Adelaide, India was given a target of 299 runs for the victory. India was going steady with Dhoni and Karthik going all guns blazing at the death. However, it was due to the hot and humid weather of Adelaide that players got to call for frequent medical assistance during the course of the match. This was right when the rookie pacer Khaleel Ahmed who was carrying out the duties of water boy came in with the drinks. Unfortunately, Khaleel stepped on the pitch, which made Dhoni lost hi cool. an irked Dhoni was subsequently seen yelling at Khaleel’s immature behavior.

However, his anger was quite justified as the Kangaroo Pacers can take the undue advantage of the treads on the pitch and that could’ve cost India with the match. India, eventually won the match and squared the series 1-1. Mahi played a crucial knock of 55* in a nerve-wracking match.

1) Dhoni had left the dugout and came on the field

The instance that tops the 5 Instances when MS Dhoni lost his cool cane during the IPL 2019. In the match against RR, Captain Cool’s temper flared up on field. Rajasthan Royals were battling it out with CSK in a nail-biting match at Sawai Man Singh stadium at Jaipur. CSK lost 4 quick wickets in their chase of 153 runs. It seemed like it would be an easy grab for the Royals. But Rayudu and Dhoni rescued their team away from trouble by holding a 95 runs partnership and took the match till last over.

Also Read: List of All Dhoni records as T20 captain

In the final over of the game with CSK needed 18 off it. Ben Stokes bowled a full toss and umpire Ulhas Gandhe signaled it a no-ball before backtracking on his decision. Dhoni, known for his calm conduct as much as his special cricketing skills, literally “crossed the line” by entering the field of play. This match saw an angry Dhoni walking on to the field of play and he was duly fined 50 per cent of his match fee for the outburst. However, the Chennai Super Kings eventually snatched the victory from the jaws of defeat by virtue of a decisive six from Kiwi all-rounder Mitchell Santner.