The SportsLiteSports at just one click!
HomeCricketDhoni Best 5 innings of all time in all formats
CricketForever Facts

Dhoni Best 5 innings of all time in all formats 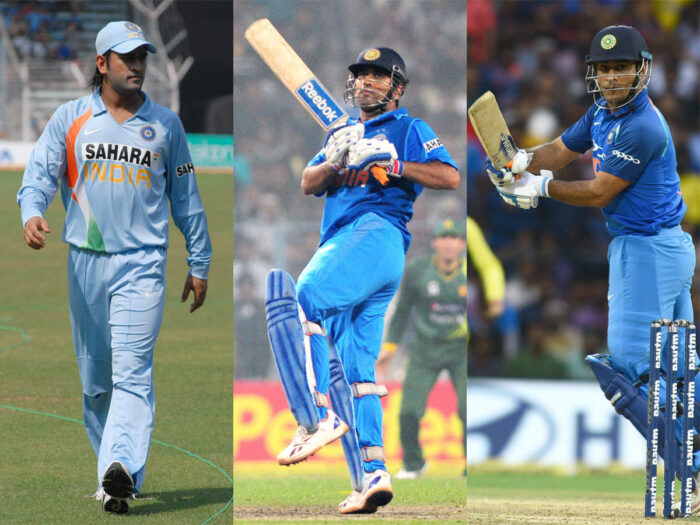 Former Indian Captain and Wicketkeeper MS Dhoni is arguably the best Batter-Keeper-Captain combination to set foot on the cricketing ground. Despite a grotesque batting style, as to how many experts call it, Mahi worked his way around and became a mainstay in the Indian Team. He showed the world that is capable of more than just pinch-hitting and playing cameos. He established himself as a reliable Test batsman and served the nation tirelessly for more than 15 years. Dhoni, who remodels his batting strategy by sensing the circumstances, always stood like a blockade before his opponents in every format of cricket. One of the world’s greatest finishers, Mahi has always dominated the opposition team with his batting. In this article, we are going to look at the best 5 innings of Dhoni of all time in all formats which will always be fresh in the hearts of all cricket fans.

Back in 2007, when there used to be Asia XI and Africa XI series. MS Dhoni had a shoddy run with the bat in the first two games, having managed to aggregate just 35. But the third game saw some gruesome hitting by the fearless Mahi. Dhoni butchered 139 runs from just 97 deliveries with 15 fours and 5 skyscraping sixes. Along with him, Jayawardene also scored a classy ton to take Asia XI out of the initial blows and piled up a massive total. MS looked in sublime touch and played some captivating On-Drives on the front foot.

December 30, 2012. 1st ODI of Pakistan’s India tour. India lost the toss and was invited to bat first. Pakistani bowlers dominated the game from the first ball itself. Junaid Khan was breathing fire with his left-arm pace. India lost half the side with just 29 on the board in the first batting powerplay. Then came MS Dhoni and took charge to take the team to a respectable total. He, along with Raina, stitched a partnership and steadied the innings. Dhoni reached his half-century in 86 balls but he lost his partner at the other end.

The recognized batting pair of Mahi and Ashwin was at the crease. Then Mahi started grueling the Pakistani bowlers with Ashwin on the other end, playing a sensible knock. Dhoni got to his century in 118 balls which means he scored his 2nd fifty off just 32 balls. He batted almost 3 hours on the damp Chennai wicket despite cramps and scored an unbeaten 113 in 125 deliveries. Though India lost the match but MS was adjudged Player of the Match for his tremendous hitting.

This was the time when MS was revamping himself from a flamboyant swashbuckler to a chase master. The third ODI of the 7-match ODI series was being played at the Sawai Mansingh Stadium in Jaipur. India won the first two matches comprehensively and the Sri Lankan team was resolute for a robust comeback. The SL cricket stalwart Kumara Sangakkara laid the foundation of this comeback with an elegant ton. He was aided well by Mahela Jayawardene. The Sri Lankan team piled up 298 runs in their stipulated 50 overs.

The target was not a cinch and to add up to that, India suffered a huge blow in the first over when Tendulkar lost his wicket to Chaminda Vaas. Then came the young man with long hair. He was promoted to number three in this tricky run chase. But the fearless MSD grabbed the opportunity with both hands and scored an unbeaten 183 runs in 145 deliveries with a strike rate of 126.6. He hit 15 fours and 10 soaring sixes during his stay on the crease. And India eased to victory in what seemed to be a stiff run chase with 23 balls to spare. Dhoni’s blistering onslaught utterly overshadowed the Sangakkara masterclass.

Yet another historic day in who’s arguably the greatest captain of the cricketing fraternity. February 24, 2013. An imperious MS Dhoni entered the Chepauk Stadium with something to prove. Despite boasting of a dangerous and experienced team, Captain Cool’s India suffered back-to-back series losses in England and Australia. His captaincy was on the line. But this was just the dark before the dawn. Mahi found his Midas touch in this home series against Australia. The swaggering MS Dhoni thoroughly demolished the Kangaroo bowling as he plundered 224 runs against the mighty Aussie line-up. Dhoni’s innings helped his team strangle the Aussies out of the game. He was adjudged Man of the Match for his brilliant double ton. Till date, he remains the only Indian Wicketkeeper with a double century against his name.

“Dhoni finishes off in style. A magnificent strike into the crowd! India lift the World Cup after 28 years!”
Screamed Ravi Shashtri in his infectious voice in the Com-Box.
On top of our list of the Best 5 innings of Dhoni of all time in all formats, is the inning that made India the World Champions. The inning that fulfilled a million dreams. The inning that reclaimed the crown that Kapil Dev and his men first lifted at the Lord’s in 1983. April 2, 2011. A day that’ll be etched in the memory forever.

The Final of the 2011 World Cup. India was up against Sri Lanka, the team having a dream run. Batting first, Sri Lanka posted a total of 274 runs. The chase was definitely not going to be an easy one given the quality of Sri Lankan bowling and the added pressure of the finals. India lost their first wicket with nothing on the board in the form of Sehwag. Soon after, Sachin also departed. Gambhir and Kohli tried to steady the innings but Kohli also got out for a well-made 35.

Dhoni promoted himself in the batting order and came ahead of in-form Yuvraj, who was later awarded the Player of the Tournament. Dhoni came and dominated the Sri Lankan bowling. He and Gambhir stitched an unforgettable century stand in the final. However, none of them could reach the three-figure mark with Gambhir getting out on 97 and MSD playing a masterclass of unbeaten 91 runs in just 79 balls. Dhoni struck 8 fours and 2 sixes in his innings and was bestowed with the Man of the Match in a big final.