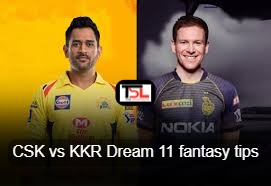 Read about CSK vs KKR Dream 11 fantasy tips and match details in this article.

Chennai Super Kings will face Kolkata Knight Riders in a very interesting match. It will be the 38th match of this year’s IPL. CSK is currently ranked 2nd in the points table. They have won 7 out of 9 matches played. On the other hand, KKR is ranked 4th currently in the points table. They have won 4 out of 9 matches played. KKR is a different beast in the second phase of the tournament. Both the teams have won their first two games in the second phase and will be looking to maintain their winning run. Sheikh Zayed Stadium in Abu Dhabi will be hosting this encounter. It will be the first match of Sundays’ doubleheader. Previously both the team have played 26 times against each other. CSK has got the upper hand with 16 wins. KKR has won 9 matches and one match had no result. It will be a hard-fought game as both the teams would want to maintain their winning run. CSK won the previous meeting against KKR by 18 runs, courtesy of an excellent 95* from Faf de Plessis in the first half of the season.

The IPL match between CSK vs KKR will be live in India from 3:30 pm. The match will be telecasted live on Star Sports Network and Disney plus Hotstar.

CSK vs KKR pitch report and other details:

The match is going to be played at Sheikh Zayed Stadium in Abu Dhabi. The pitch offers a batting-friendly surface. Pacers can perform well at the later stage today with spinners coming in handy in the middle overs. The average 1st innings score on this ground is 160. Teams batting second here have won 60% of the time. Fielding first should be a wise decision after winning the toss here today.

Also read: List of all Types of Awards in IPL