The SportsLiteSports at just one click!
HomeFootballJuventus Transfer News: Possible Destinations Of Manuel Locatelli Ahead Of The New...
Football

Have a look at the transfer news surrounding Italian midfielder Manuel Locatelli who favours a move to Juventus ahead of the new Serie-A season.

Premier League club Arsenal have also shown interest in the Italian midfielder who favours a move to Turin instead of missing out on Champions League football. Meanwhile, Juventus have an offer ready on the table matching the valuation of the Sassuolo player.

23-years-old Italian midfielder Manuel Locatelli has agreed on personal terms with Serie-A runners up Juventus who have a €40million offer on the table. Sassuolo are waiting for the bid to increase so they can begin negotiations with Juventus who are desperate to bring him to Turin. 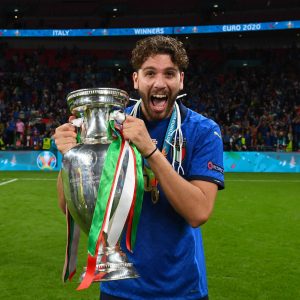 Manuel Locatelli joined Serie-A club AC Milan when he was 11 years old and progressed through the youth ranks of the club learning along the way. He signed his first professional contract with the club in 2015 and featured in two games for the Italian club in his first season.

In the following two years, he managed to score two goals for the club in 63 appearances in all competitions. However, he fell down the pecking order when Genaro Gattuso was appointed as the head coach of the club in 2017. As a result, he was loaned out to Serie-A club Sassuolo with an option to make the move permanent.

ALSO READ: Barcelona Transfer News: Financial Woes At The Camp Now Ahead Of The New Season