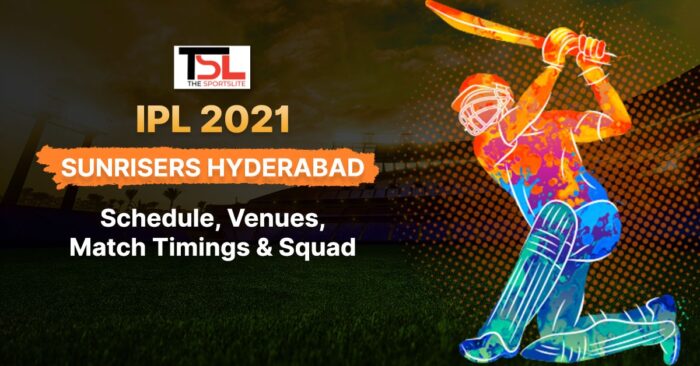 The Indian Premier League resumes on September 19 and all the games will take place in the United Arab Emirates. The Board of Control for Cricket in India (BCCI) has announced the schedule for the second half of the season. 29 matches out of the 56 league-stage have been played and now it is time to see who bags the title after the second leg. In the artcle, we will see about the remaining Sunrisers Hyderabad Schedule for second phase of IPL 2021.

Sunrisers Hyderabad will have to fight hard in the remaining Indian Premier League (IPL) 2021 season. It will grant them a place in the playoffs. The Orange Army suffered an unimaginably bad campaign in the initial half of the season. They lost six games out of their first seven matches. As a result, the league table could afford to have them at the last standing rank.

Sunrisers Hyderabad’s net run rate remains on the lower side. One more loss seems to be enough to knock them out of the tournament. Apparently, Sunrisers Hyderabad happens to be the only team to have advanced to the playoffs every time in the previous five seasons. However, their sensational streak seems to be a massive risk. It must be interesting to see whether the 2016-season champions can defy the odds.

The Kane Williamson-led side has to unleash its top potential right from the first match of the second leg. Identifying a fine lineup should be the first challenge of the team. They did a lot of trimming in the team during the initial half of the season. They even risked dropping off their David Warner from the playing XI in order to seek better results.

Nevertheless, ruling the Sunrisers out of the competition does not look to be wise for other teams. With big names like Williamson, Jonny Bairstow, and Jason Roy the team does have a potentially strong batting order. At the same time, Bhuvaneshwar Kumar and Rashid Khan are the ones responsible for taking over the bowling side. SRH resumes its IPL 2021 campaign against Delhi Capitals on September 22.