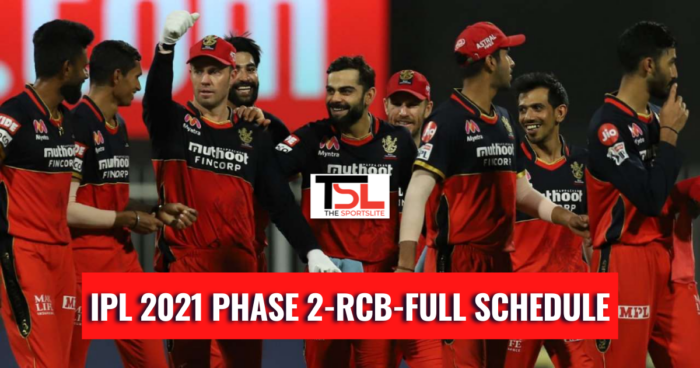 IPL 2021 resumes on September 19. The Board of Control for Cricket in India (BCCI) announced the tournament schedule on Sunday (July 25). Let’s see more about the Royal Challengers Bangalore Schedule for the second phase of the IPL 2021

RCB performance so far in the IPL 2021

Royal Challengers Bangalore (RCB) has shown brilliant performance in the Indian Premier League (IPL) 2021. The Virat Kohli-led army of cricketers enjoyed a fantastic run in the first leg. They won five of their first seven games. A sweet spot in the playoffs was just a couple of wins away but the second wave of COVID-19 washed off that dream.

RCB was supposedly too disappointed due to the season suspension as they were on a good roll. The top players like AB de Villiers, Virat Kohli, and Devdutt Padikkal scored huge runs. the bowling side was brilliantly managed by Harshal Patel and Mohammed Siraj. As a result, RCB secured the third rank in the team standings at the time when the tournament got postponed.

Time will tell whether the Royal Challengers Bangalore will hold the glory. Virat Kohli’s men will certainly be dedicated and diligent towards getting the desired result. However, their road to glory is definitely not going to be a cakewalk. This is because there are teams who are massively in-form like Chennai Super Kings, Mumbai Indians, and Delhi Capitals.

Notably, RCB requires just three victories in their remaining seven league-stage games to earn a place in the playoffs. Their initial performance in the first half of the season does not prove it to be a hefty task for them. Meanwhile, Kohli’s men resume their campaign against Kolkata Knight Riders on September 20 in Abu Dhabi.