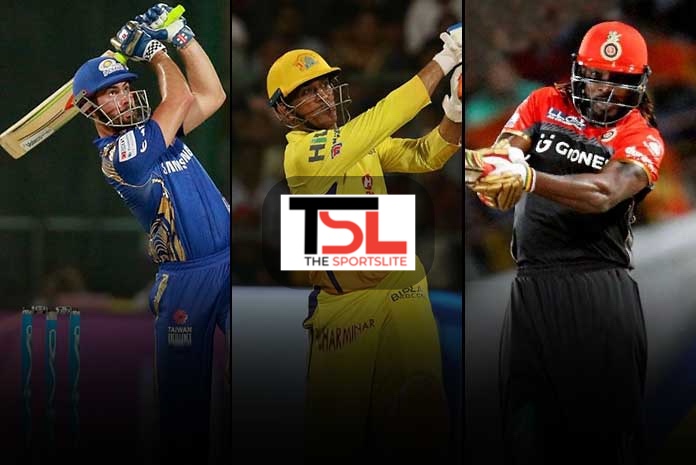 In the memory lane of IPL, we have seen some of the biggest hitters of the ball along with some of their biggest hits that went straight out of the park. The audience loves nothing more than watching their favorite player strike humongous sixes. In this article, we will know about the Top 5 All-time Longest Sixes in IPL.

The West Indies all-time star Chris Gayle finds himself with destructive ex-Indian all-rounder Yuvraj Singh for the joint 5th place rank in the list. Chris Gayle struck the long 119m six in 2013 along with Yuvraj Singh who has also struck the ball for equal distance. Along with them is Ross Taylor, he stuck the 119m six in the inaugural season of IPL against Jacob Oram while facing CSK. Taylor scored a total of 53 runs in 34 balls that match.

The now CSK player used to play for KKR and RCB previously. The veteran batsman is playing in the IPL since its inaugural season. In his early stint with RCB, Robin Uthappa struck a huge 120m six in a Dwayne Bravo delivery ranking him 4th in the list.

3rd in the list is Aussie legend Adam Gilchrist with a 122m long six. The wicketkeeper batsman was known for his brilliant batting skills. In a match against RCB Gilchrist struck a huge 122m six against pacer Charl Langeveldt. Gilchrist went on to score 106 runs that match off just 55 balls.

The 2nd rank holder is unexpectedly a bowler. We know Praveen Kumar for his bowling rather than batting. Praveen Kumar hitting a six for 124m is more of a surprise to us than a stat. What surprises more is Praveen struck the six against the all-time highest wicket-taker in IPL, Lasith Malinga.

Watch when Praveen Kumar hit the biggest six in the Test:

The retired South African and Chennai Supper King’s all-rounder Albie Morkel holds the top stop in the list with a 125m six. Morkel struck the gigantic six in the inaugural IPL season against spinner Pragyan Ojha. Further, Morkel finished the CSK innings with a knock of 29* off 19 balls.