Top Five bowlers with most four-wicket haul in IPL history 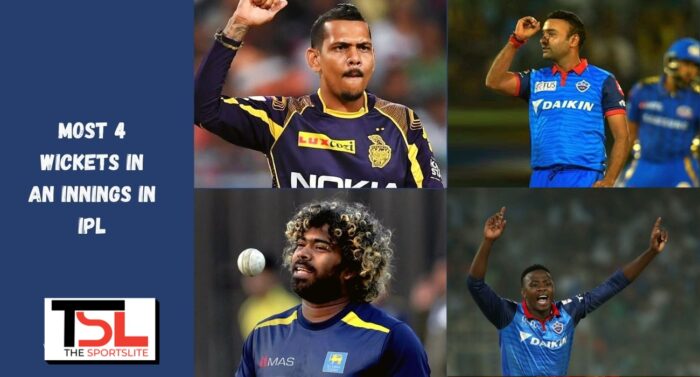 Bowlers play a very important role for a team by keeping the opponent’s runs in control. As a famous quote says “Batsmen win you matches and bowlers win you tournament”. In a star-studded tournament such as IPL, being a bowler is not easy especially in run-friendly Indian pitches. Down the timeline, we have seen some of the best bowling displays from star bowlers in IPL. In this list, we will rank the Top 5 bowlers with the most four-wicket haul in IPL history.

The South African ace is well known in the Indian cricket circuit for his precise pace bowling. He has a total of 4 four-wicket hauls in IPL so far. Rabada has the ability to pick quick wickets with his blistering bounce and pace. Previously, he has won the Purple cap once in the year 2020. He also has 69 wickets to his name in 32 matches with an economy of 8.32 in IPL to date.

Another South African makes it to the list with 4 four-wicket hauls in IPL till now. Chris Morris is a well-known all-rounder currently playing for RR. Mostly a bowling all-rounder, Morris has the capability of winning matches with his bat too. He has taken a total of 94 wickets in 77 matches with an economy of 7.88 in IPL so far.

The veteran spin bowler ranks in the list for taken 4 four-wicket hauls in IPL too. He also holds the record for taking the most number of hattricks in IPL. Currently playing for DC, In 154 matches played, Mishra has taken a total of 166 wickets in IPL history, second to Lasith Malinga. He has an economy of 7.35 in the star-studded tournament.

The Yorker King is a legend for both his country Sri Lanka and franchise MI. Malinga has got 6 four-wicket hauls to his name. The yorker specialist has also won the Purple Cap in the tournament for extraordinary performance in IPL 2011. Malinga has picked up record 170 wickets in 122 matches with an economy rate of 7.14.

The mystery spinner from the Caribbean ranks 1st in the list with 6 four-wicket hauls in IPL with an economy rate of 6.78. Narine has been a part of KKR since his debut in the tournament in 2012. Known for his mystery bowling, Narine gives a hard time to the batsman he faces. He has picked up a total of 130 wickets in 124 matches. Not only bowling, but Narine is also a destructive opener these days in T20 cricket.