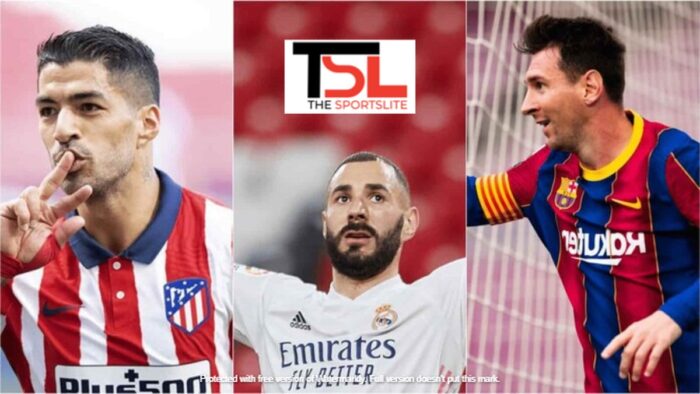 The 24 years old Moroccan international won Europa League in 2019-20 season. He continued to have an eventful individual season for Sevilla. En-Nesyri is known for his fearsome ability in front of the goal. The striker amassed an impressive 18 goals in the 2020-21 La Liga season in 23 starts for the club. Putting him on 5th of our list of top five highest goal scorers in La Liga 2020-2021.

In what turned out to be a redemption season, after a sad departure from FC Barcelona following an excellent 6 season spell at his former club, the Uruguayan led Atletico to a La Liga title. The Striker accumulated 21 goals from 30 starts which puts him in the 4th spot in our list.

Also Read: List of Players with Most Appearances in La Liga

The defending champions were led yet again by the ever so reliable Karim Benzema, for another title contention. He had a total of 22 goals. His average was an eye watering 3.86 shots on target per game. The brilliant Frenchman was crucial for Los Blancos to maintain the title charge until the last match week which earns him the 3rd spot in our list of top 5 highest goal scorers in 2020-2021.

Villareal, in a surprisingly eventful season domestically as well as on the European stage, showcased a lot of eye-catching talents. The icing on the cake being 29 years old Spaniard Gerard Moreno. Moving ahead of Karim Benzema in the Pichichi Trophy race up to the second position with 23 goals in 30 starts in the League. The sensation’s delightful season was a prelude to the appearance for Spain in the Euros.

The magician, in his final season for FC Barcelona, was at his imperious best. Head and shoulders above every other candidate. The Argentinian icon struck up 30 goals to wrap up the 2020-21 Pichichi Trophy. His goals puts him on top of the list of top five highest goal scorers in La Liga in 2020-2021.