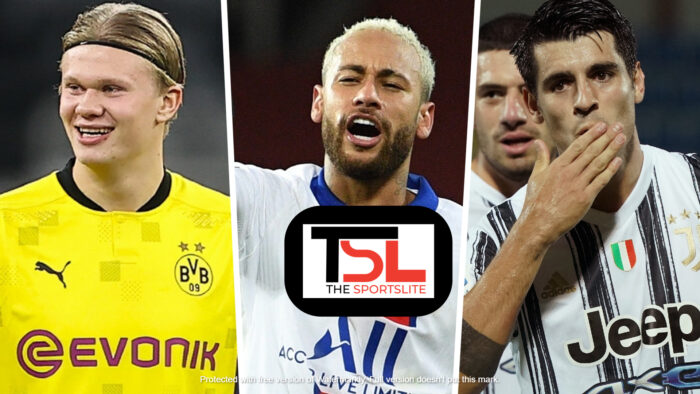 The grandest of stages in club football. After a start-stop season in 2019-20, 2020-21 was a pure spectacle to behold. The highest goal scorers in the UEFA championship in 2020-2021 were the ones who showed composure in front of the goal.

The talismanic Brazilian faced a gruesome 2020-21 season riddled with injuries. playing only 18 games in the French League. However, his impact in the Champions League was undeniable, notching up 6 goals in just 9 games, despite falling short of the second consecutive final appearance in the tournament. This puts him in the 5th spot in the list of highest goal scorers in UEFA championship in 2020-2021.

Also read: Players with Most Appearances in UEFA Champions League

Manchester United’s story in the UEFA Champions League came to an abrupt crashing halt, despite starting early with flying colors in a very difficult group. In all this pandemonium, English international Marcus Rashford managed to put noteworthy figures in the top scorer chart with 6 goals in just the group stage earning him the 4th spot in our list.

The deadly Spanish poacher found the net 6 times in the tournament, despite Juventus ending the season far from fulfilling the high expectations. It was set up to be the perfect prelude to featuring for the Spanish national team in the Euros. He is the 3rd player in the list of UEFA championship Most goal scorer in 2020-2021.

Mbappe grabbed the headlines and the gossips for the entirety of the season. The Frenchman featuring for PSG backed it up with a total of 8 goals in the tournament. However, as it stands this could only be the beginning of an iconic career.

The Norwegian beast stunned his admirers as well as his detractors yet again. He showed phenomenal resourcefulness in front of the goal. Unplayable in most of the games, the Borussia Dortmund forward topped the list of top five Highest Goal Scorers in UEFA Championship in 2020-2021 with 10 goals.

Also read: List of Goalkeepers with All-time Most clean sheets in La Liga

Sagnik Chakrabortyhttps://thesportslite.com
Sagnik Chakraborty, currently an MBA student in Sports Management, working in football analysis and content writing. He sees himself as one of the best football Analysts in India & the world.
RELATED ARTICLES
Top-5/Top-10