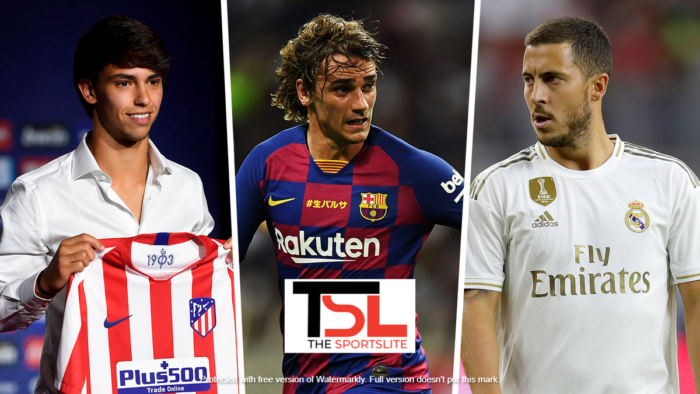 La Liga has never been short of talent and homegrown players. Even then, the modern world of football has brought in great revenues for the clubs. Purchasing hugely talented and popular players not only improves a club’s play but also increases its reach and revenue. La Liga has never been short of such high-value purchases. Let’s have a look at Highest incoming Transfers in La Liga.

Hazard moved from Chelsea to Real Madrid at the start of 2019-20 season. He was a talismanic player for Chelsea but has been a shadow of himself since then. His progress at Real Madrid has been hindered by injuries. His move to Real Madrid for €115 million but could rise to €146 million. This puts him at the 5th position in our list of top five highest incoming transfers in La Liga.

Felix was signed as the replacement for Antoine Griezmann. But he has not had the best time at Atletico Madrid. Felix joined Atletico Madrid from Benfica for a reported €127.2 million. He came after winning the 2019 Golden Boy award and seems to be settling down slowly at Atletico. His price tag makes him the 3rd highest incoming transfer in La Liga.

Dembele moved from Borussia Dortmund to Barcelona for a staggering €130 million. He usually delivers when he is fit but has spent half of his career at Barcelona at the sidelines with injury. Dembele signed for Barcelona mainly to replace Neymar who departed for PSG. The huge price tag puts Dembele on 2nd in our list.

Coutinho wanted to join Barcelona from Liverpool at the start of 2017-18 season. Jurgen Klopp’s arrival at Liverpool saw that move delay to January, 2018. Coutinho moved from Liverpool to Barcelona for a humongous €145 million. But has not been much successful at the club. The extremely high price tag makes him the leader in the list of highest incoming transfers in La Liga.