The SportsLiteSports at just one click!
HomeCricketIndia vs New Zealand Head-to-Head T20I Stats and Records
Cricket 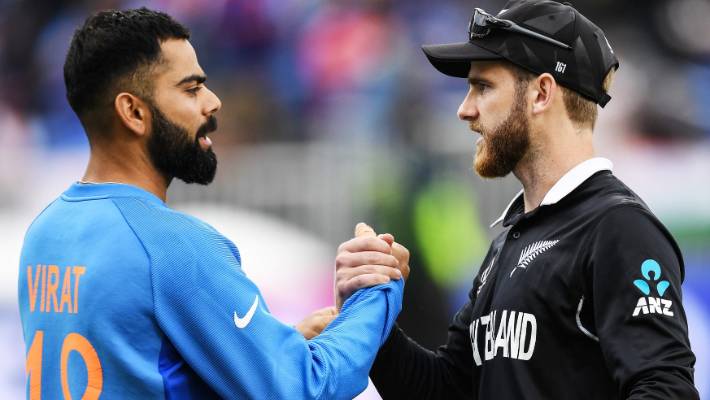 Oh, how the tables have turned for Virat Kohli and his men in the span of a week. After a heartbreaking end to their unbeaten streak against Pakistan in ICC World Cups, they now stand face-to-face against the Blackcaps. The same Blackcaps who they’re yet to beat in ICC events. The Indo-Kiwi rivalry has been one of cricket’s hottest rivalries since the 2019 World Cup Semi-Final debacle. With both teams eyeing a much-needed victory in order to keep their hopes alive, entertainment is almost guaranteed. Keeping an eye on the crucial encounter, this article gives an insightful look at the India vs New Zealand head-to-head T20I records.

The two T20I super heavyweights have faced off against each other on 16 different occasions previously. Both sides are yet to take a lead in the rivalry as it is tied 8-8. However, their encounters at Hamilton and Wellington ended in a tie and the result was decided in a super-overs. India emerged victorious in both the thrillers and went on to clean sweep the Kiwis at their home 5-0. The two sides have faced each other twice in the T20 World Cup and NZ has emerged on top in both of them.

The highest total posted by the Kiwis against the Men-in-blue is 219 at the Westpac Oval in Wellington, 2019. Similarly, the highest total posted by India against New Zealand is 208 at Seldon Park in Hamilton, 2019. Speaking of the lowest team totals, NZ was restricted to a total of 61/6 in 8 overs (D/L) by India in 2017. Similarly, India also registered its lowest total in the same game, posting 67 runs in the 8-over-per-side game at the Greenfield International Stadium, Thiruvananthapuram.

Colin Munro is ruling the charts as far as the batting stats of the T20I games between the T20 giants are concerned. The 34-year-old has scored an impressive 426 runs against India, followed by Ross Taylor (349) and Rohit Sharma (335). Munro is the only centurion in the 16 clashes between the two sides with a score of 109*. As far as the bowling department is concerned, Ish Sodhi has picked up the most wickets with 17 scalps under his belt. Sodhi is followed by the prolific pace duo of Tim Southee (12) and Jasprit Bumrah (10).

After suffering defeats at the hands of India’s notorious neighbors Pakistan, both the teams would be heading into the match with their backs against the wall. Even a single slip-up could cost them the tournament as the game is being deemed as a virtual quarter-final. The stakes couldn’t be any higher as both sides gear up for an unmissable showcase at the Dubai International Stadium on Sunday. With the av availability of Martin Guptill being a question mark, the Blackcaps have to step up to the need of the hour. As far as India is concerned, a few strategic changes and an inspired start could very well turn the tide to Virat and his boys. Above all, we’re in for a treat as both the parties are ready to give it their all for the glory of their motherland.