What are all Types of Raider Moves in the Pro Kabaddi League? 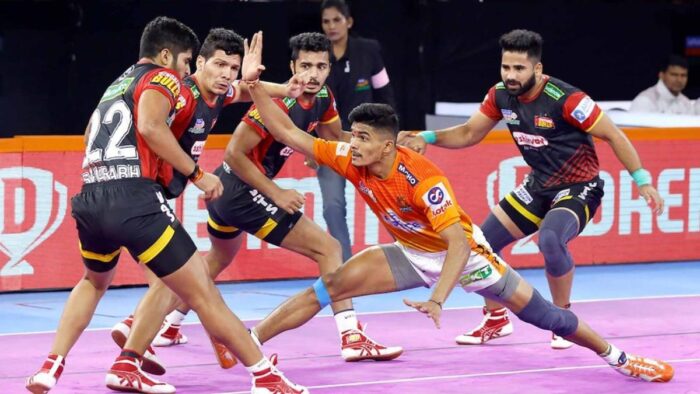 The biggest difficulty in the sport of kabaddi is the raider-defender ratio. While it is physically stressful but also emotionally challenging for the raider to face the entire team. The raider needs to perform every raider’s move fabulously to get the maximum points for his team. Moves that raiders perform in the opponent’s court to get points are known as offensive skills. In this, the raider enters the opponent’s half to touch the defenders and score points for their team. A few of the most popular offensive exceptionable expertise in the sport of kabaddi is toe touch, running hand touch, lion jump, back kick, sidekick, and dubki. Let’s get going and know about some types of raider moves in the Pro Kabaddi League.

This is a skillful raider move that requires a lot of practice and concentration. It requires exceptional timing and sharp instincts to be pulled off. As the name suggests, the movement is equivalent to taking a dip In the water. In a Dubki, the raider dodges the chain tackle by the defender team. The raider ducks below the stretched arms of the defenders and makes an attempt to escape.

This technique in kabaddi is one of the most clever skills. Also known as the ‘mule kick’ this move is a real-life representation of ‘bluff’. In this, the raider deceives the defense by turning around and showing his back. He then tries to kick backward which when hits a defender, they receive a touchpoint.

Also Read: What are all Types of Defenders Moves in the Pro Kabaddi League?

This trick is one of the primary kabaddi attacking skills. This movement tests pro-activeness and reflexes.

This move was popularized by Pawan Sehrawat in Vivo Pro Kabaddi. Lion Jump requires unbelievable power and thrust generated from the legs of the raider. A kabaddi raider tries to jump over the defenders to escape and reach the mid-line in a lion jump. This is the most athletic move in the game. This is the most difficult move in the sport of kabaddi and is very tough to perform and master.

In this move, the raiders have a way to get a point by making a surprise touch using their foot. This move, known as the Toe Touch, involves the raider ducking low to escape the hands of the defender and instead attack their feet using just the tips of their toes.