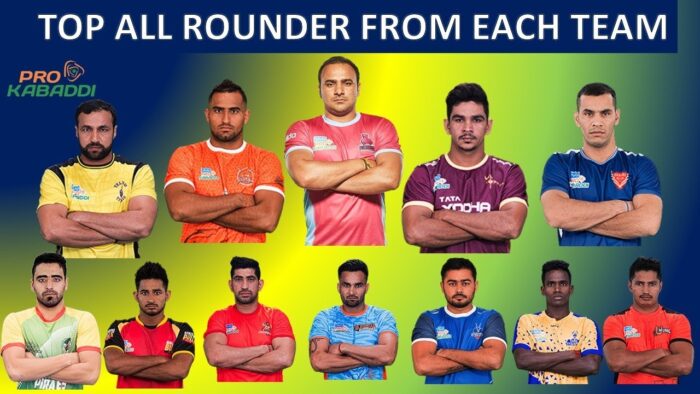 With the famous Pro Kabaddi League; kabaddi has seen the making and breaking of records with leaps and bounds. This seven-long-season league has seen an increase in its popularity over the years. Many local and national associations have come forward to support the game and the players. With the Pro Kabaddi League knocking on our door, let’s get to know the top five highest-paid all-rounders in season 8 of this league.

All-rounder from Iran, Mohammadreza is the fifth highest-paid all-rounder in the eighth season of the fierce league. The player usually plays in the left corner, hence being an expert in body blocks. He is famous for waist holds and dives that offer inexorable blows on the raider.

In the auction for this season, the defender sparked a bidding war between many clubs. In the endless bidding, the three-time champion- Patna Pirates emerged victoriously. The club acquired Mohammadreza, an overseas player at a whopping amount of 31 Lakhs.

This Rajasthan-based all-rounder had a strong footing in the 2021 auction. It was surprising to see Haryana Steelers going all-around to acquire a player placed in Category- C. Brijendra plays in the position- right corner. Though it took a huge chunk of their budget, Haryana has full faith in the player and believes he will outperform himself to bring back laurels to the team.

Players often feel the burden of their billing prices building upon their shoulders. Brijendra has the same weight on him in this season. Everybody expects a great performance from Brijendra which will justify his 55 Lakh purchase in this season.

The do-or-die raid hero Deepak Hooda has created a name for himself. One of the best all-rounders in the game, his ascension has been rapid. Hooda has instigated the curiosity of the audience and made them awe time and again with perfectly timed and speedy body moves. The king of ‘Running Hand Touch’ he is the third highest-paid all-rounder in the 2021 PKL.

The raider was the second most expensive player in the inaugural season of the league. He has been a part of Telugu Titans and Puneri Paltan for two seasons respectively. In the current auction, Deepak was roped in by the Jaipur Pink Panthers for a massive amount of 55 Lakhs.

Beginning his career as a pure corner defender, no one at first would have believed that Sandeep would be one of the best all-rounders. With his famous ‘block’ in which he forms a human wall in front of the raider, Narwal has always given positive results to the team. With continuous improvement in raiding, he is now one of the only three all-rounders to cross the 500 mark.

Now ranked 10th on the PKL’s all-time points leaderboard. For season 8 of PKL, Dabang Delhi has signed him for INR 60 lakh.  In season 7, he became the fourth player to score 300 tackle points.

The skipper of Gujrat Fortune Giants, he is one of the most promising players in recent years. In his debut season,  he was one of the major contributors in the run to finals. He proved to be one of those raiders who scored when the team needed the most. It was then that he received the “do-or-die” specialist.

His 35 raid points in the 5th season were the third highest.  Haryana Steelers, who ranked 5th in 2019 PKL, is the Highest Paid All-Rounders in Pro Kabaddi League Auction when they paid Rupees 83 Lakh for Rohit Gulia.