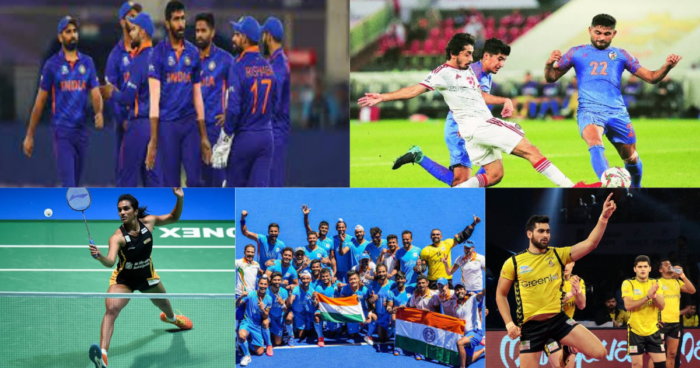 With over 1.39 Billion people, India is the world’s second-most populous country in the world. India is home to not only a vast population but also passion and obsession. Despite having diversified choices, there are a few places with concentrated likings. One of such things is sports. With the presence of innumerable options, there are several sports that are immensely loved by the Indian audience. Let’s have a look at the top 5 sports in India.

The national sports of India- Hockey is still trying its level best to regain its pride. There was a time when the Indian Hockey Team brought back-to-back gold for India. However, due to incessant infighting in the hockey federation led to the decline of Indian hockey. The best part is that our national sport has shown the signs of revival! The two biggest pillars of its revival are- HIL and the performance in Tokyo Olympics. Hockey India League (HIL) is a league based on the IPL model.

Badminton is currently the second most played sport in India. Even though badminton is one of the most loved sports in India it required success on the international stage. The Indian players have worked hard enough to locate India on the global map. Players like Saina Nehwal and P V Sindhu have etched their names in history. In the next Olympics, India is all set to conquer the top prize!

Football in India is the ‘sleeping giant’ of the footballing world. Even though the country consisted of the largest viewership for the world football, the Indian Football Team is ranked 105th in the world. If we take the population of India into consideration, not being able to qualify for World Cup even once is a big failure. This is a professional as well as an institutional failure. The Europeans however have made efforts that has made the entire young generation of India to go berserk about football! Following the example set by European clubs, India has its own football league now, the Indian Soccer League (ISL).

A few years back, no one would have thought Kabaddi to take the central stage in Indian Sports. A sport native to the Indian subcontinent, it has been one of the most popular sports. The biggest push that kabaddi has ever received turned out to be the Pro Kabaddi League! India and Iran are the two top kabaddi playing nations in the world at the moment. India has won all the Kabaddi World Cups until 2017. The league also has recorded over 100 Million viewership, and we know this is just the beginning.

The fan-following of cricket in India is unparalleled. It is followed religiously by almost every person in the country. Celebration after wins is like a little festival. There are many reasons behind the sustained popularity of cricket. One of it being the regular telecast of cricket matches by channels. India’s performance in cricket has a huge role to play in its sustained popularity. Owing to this, they often land with huge endorsement deals.

These were the top 5 sports in India. Share your views with us on this topic in the comment.