Indian Sports History: India’s Achievements in all Sports after Independence 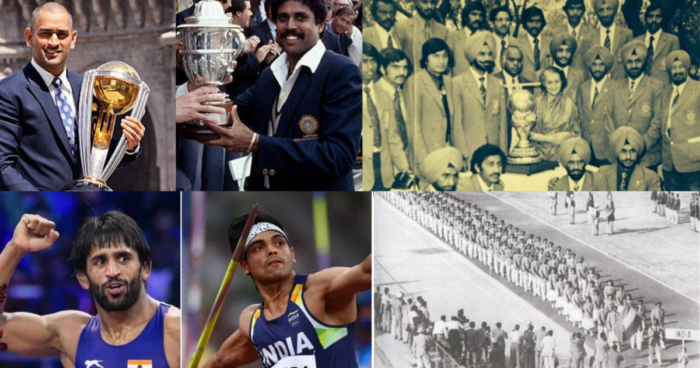 A mantra in Atharvaveda quotes “Duty is in my right hand and the fruits of victory in my left“. Therefore the history of sports in India dates back to the Vedic Era. After overcoming the wounds of colonization for centuries, India stood back on its foot. Since then India has achieved some milestones in those moments we celebrated as a nation. Here is a list of India’s achievements in sports after independence.

Asian games are a multi-sport event. It aimed at strengthening the roots of the friendship of Asian countries. In the year 1952, India hosted the first-ever Asian Games in the capital city of Delhi. This was a huge step towards invoking the cooperation of other Asian leaders in the new sports venture. It is a milestone in the history of sports not only in India but of entire Asia.

In 1952 KD Jadhav, then 27, won a bronze medal in the Olympics game. He, therefore, created history by being the first Indian to win the Olympic medal. It was difficult for him to adjust to the mat surface & after two fouls he has to satisfy with Bronze Medal. However, an Olympic medal is an Olympic medal, and the nation celebrated it like a festival.

The 1975 Hockey World Cup was the third edition of the Hockey World Cup tournament. It took place in Kuala Lumpur, Malaysia. In the final, India defeated Pakistan with a goal difference of 2–1. Hockey Wizard Dhyan Chand scored the World Cup-winning goal. It was this time that is referred to as the ‘golden period’ of Indian hockey.

The IX edition of the Asian Games took place in New Delhi from November 19 to December 4, 1982. Over a million people collected to applaud events that took place in 17 sports venues. It was the biggest Asiad since its inception, 31 years ago. There were 4,595 young sportsmen and women, from 33 countries that took part in the games.

This game was the pinnacle of cricket in India. Not only did India bring home the most unexpected World Cup, but also established cricket as we see it today. The Indians in this tournament showed that they had mastered the one-day game, bowling tightly, fielding better than any Indian team in the past, and never giving up. This game was a milestone achieved and the reason why cricket today is loved.

The 2011 World cup was the turning point in India’s history. India won the tournament, defeating Sri Lanka by 6 wickets in the final at Wankhede Stadium in Mumbai. They thus became the first country to win the Cricket World Cup final on home soil. Mahendra Singh Dhoni’s last six still brings chills to every Indian. Yuvraj Singh was crowned as the player of the series.

Tokyo Olympics was undoubtedly one of the most successful Olympic games for India. It was the first time that India received a medal in track and field events, and that too a gold. India showed success and improvement in various fields such as Hockey (both men’s and women’s teams), Golf, javelin throw, etc.

Below mentioned are a few more instances of India’s Achievements In Sports After Independence, in addition to the above mentioned: