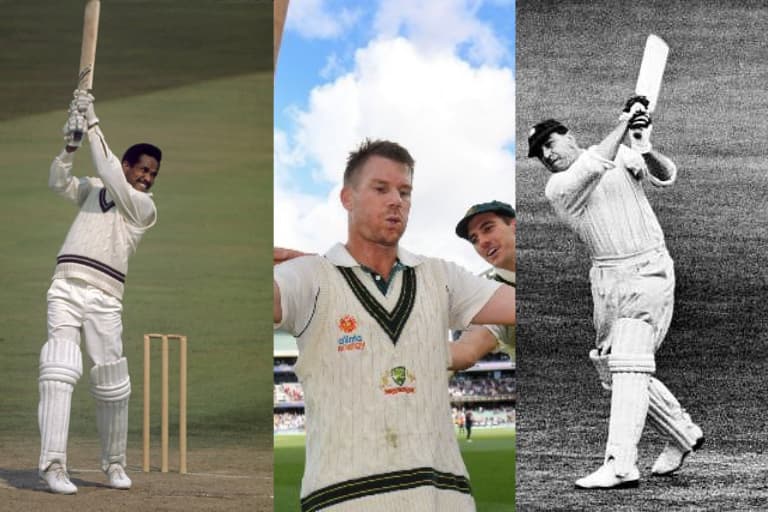 The ever-intriguing Test cricket is considered very special in itself. Every player dreams of donning white Jersey for his nation. The real test of a batsman lies in Test cricket. The batsman who stars in this format, his stature automatically increases in the world of cricket. A batsman’s patience, temperament, technique, and skill to score runs are verified in Test cricket only. There is an actual chance of playing a long inning. Scoring a triple century in Test cricket is considered a huge achievement. Some batsmen have crossed the 300 mark in Tests. But there have been only a few batsmen who have converted their triple centuries into 350 and 400. So, with that being said, let’s turn back the pages of history and have a look Top 10 Highest Individual Scores in Test Cricket.

This mammoth inning of the flashy southpaw came against Pakistan. Warner played 418 balls and scored 335 unbeaten runs. During his inning, he looked in sublime touch. Although Warner, who scored the first triple century of his career, also had a chance to score 400 runs in this match, but captain Tim Paine declared Australia’s first innings at 589/3 and invited Pakistan to bat. By dint of the phenomenal triple century by Warner, the Kangaroos defeated Pakistan by an innings and 48 Runs.

Whenever all-time great batters will be listed, Walter Hammond will definitely feature in the list. The current World Test Champions and then minnows New Zealand invited England for a two-match tour. This tour proved to be the milestone that was lacking in this “Self-taught cricketer’s” career. He took the Kiwi bowling by storm and scored the fastest triple century, in terms of time. He just took 4 hours and 48 minutes. Cutting, driving, hooking, and pulling the ball all around the ground, Wally smashed 10 Sixes and 34 fours. He ended the series with an average of 563, a record that remained unscathed for 65 years.

This knock by the Hanif Mohammad is much remembered for the 970 minutes that he spent on the crease. Playing a marathon inning of 337 runs against the mighty Caribbean bowling lineup, the Pakistani legend saved the match. This is still the longest innings in terms of time in Test cricket. The little master stepped up on Day 3 when his team was asked to follow-on and had a deficit of 473 runs. Back then it was the second-highest individual Test score and even today it is the only instance of a batter scoring a triple hundred in the second innings of a match.

In the year 1997, India went on a tour of Sri Lanka. The first Test match between the two countries was played on the flat pitch of Colombo, which offered nothing to the bowlers. Still, the credit can’t be taken away from Jayasuriya, who batted with grit and determination. The marathon partnership between Sanath Jayasuriya and Roshan Mahanama began on the third day of the test match. The Indian bowlers did not get any wickets for the next two days. The two shared a 576-run partnership for the third wicket, which at that time was the highest partnership in Test cricket history. Jayasuriya batted for 799 minutes before being dismissed leg before by Anil Kumble. The match ended in a draw but not before the host team shattered a few World Records.

One of the most technically sound batter to ever grace the cricket ground, Hutton first captured the vision of the cricketing fraternity as a 22-year-old. He amassed 364 against Australia at The Oval in 1938, to record the then highest score in Test cricket. The young English man took giant strides, stroking his way to one of the most incredible innings in the history of the game. Batting first after winning the toss, England declared their first innings at 903 for 7 and became the first team to score 900 runs in Test cricket. This record of England persisted for the next 59 years. Hutton was the spine of the English batting during his playing era. Had he not been in the Bradman’s era, he definitely would’ve been the greatest batsman of his time.

Denominated as one of the finest all-rounders to have set foot on the pitch, Sir Sobers played this marathon knock against Pakistan in Kingston in 1958. The then 21-year-old came after the fall of 1st wickets and dominated the crease for the next 674 minutes and scored 365 runs. It was the highest individual score in Test cricket at that time, which lasted till 1994. Sir Garfield Sobers had shown glimpses of a great batsman previously but he was yet to prove his caliber. This match proved to be a turning point in his career and the match ended in an innings victory for the home side.

The backbone of the Sri Lankan cricket for decades Mahela Jayawardene aggregated 374 Runs against the Proteas. This innings of Jayawardene is as much remembered for his individual brilliance as much for the colossal partnership stitched with Sangakkara. He played this marathon inning while facing 572 balls at the Sinhalese Sports Club ground in Colombo. He hit 43 fours and a six. Jayawardene batted for 752 minutes.

The West Indian legend is the only player to feature twice in the list of top 10 highest individual scores in the history of Test cricket. Brian Lara eclipsed passed Gary Sobers’ 36-year-old record on April 16, 1994. He scored 375 runs against England at St John’s. Lara hit 45 fours in this innings. He faced 538 balls and occupied the crease for 766 minutes. Apart from this, scored a world record unbeaten 501 for Warwickshire in the same year, outranking Hanif Mohammad’s tally of 499 set in 1959 in first-class cricket. Consequently, 1994 proved to be a watershed year for the stylish Trinidadian southpaw.

This was the time when Australia used to monopolize world cricket. Team Australia, who won 1999, 2003, and then 2007 World Cup, had no competition in any department. In the same year i.e. 2003, Australia’s opener Matthew Hayden played the world’s biggest Test innings at that time. Against a not-so-intimidating opponent, the swashbuckling left-handed opener stepped up. Former Aussie batter Matthew Hayden broke Lara’s 375-run record by scoring 380 against Zimbabwe on 9 October 2003. Hayden achieved this feat at the Perth ground. Haydos, who came out to bat from 10 am on the first day, held the bat till noon the next day. He had scored 60 percent of the runs in this score by hitting fours and sixes. In his innings, Hayden batted for 622 minutes and faced 437 balls. Hayden’s innings had 38 fours and 11 sixes.

Former West Indies batsman Brian Lara tops the list of top 10 highest individual scores in the history of Test cricket. Lara had scored an unbeaten 400 runs in the final match of the 4-match series against England. He made this record on the third day of the Test match played at Antigua Recreation Stadium. He is the only batsman to score 400 runs in Test cricket. Lara hit 43 fours and four sixes in his innings. He faced 582 balls during his 778-minutes long innings. Thanks to this innings of Lara, West Indies scored 751/7. With this innings, Lara broke the record of Matthew Hayden of Australia, who scored 380 runs in Tests against Zimbabwe in 2003. Even before this, the record for the most runs in an innings of a Test belonged to Lara (375), which he made in 1994.