The SportsLiteSports at just one click!
HomeForever FactsGujrat Giants – Squad, Owners, History, Records, And Everything You Need To...
Forever FactsKabaddiPro Kabaddi League

Gujrat Giants – Squad, Owners, History, Records, And Everything You Need To Know 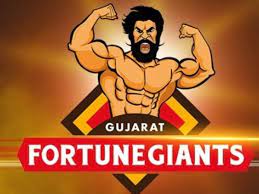 Gujarat Fortune Giants is a kabaddi team based in Ahmedabad, Gujarat. They represent the state in the Pro Kabaddi League. They played their inaugural match in season seven, that is 2017. With its introduction, the team began charging its opponents with its mighty war cry ‘Garjega Gujrat‘. Before we get all enthusiastic about the eighth season of The Pro Kabaddi League, let’s get to know more about the Gujrat Giants.

The Journey Of Gujrat Giants From The Inaugural Season Till Now

Also Read: Patna Pirates- History, Players, Records, And All You Need To Know

The Squad Of Gujrat Giants

Who Is The Owner Of the Gujrat Giants Kabaddi Team?

The Gujrat Giants team is owned by Adani Wilmar Ltd. According to them, sports play a pivotal role in the overall growth of the nation. With the objective of promoting the culture of sports, Fortune visualized the idea of creating a Kabaddi team for its home state Gujarat.

What sets Gujarat Giants apart from the other teams is the ideology of creating a hero out of every player instead of depending on one.