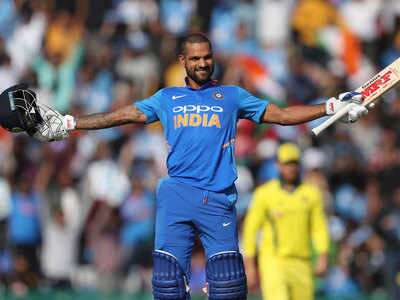 Shikhar Dhawan is one of the most popular names in the world of cricket. The top-class left-handed Indian opener is recognized best for his display of swagger on-field and his fearless batting style. The Delhi-born is one of the best openers of the past decade and his partnership with fellow opener Rohit Sharma is deemed to be one of the most successful opening pairs in cricket history. In addition, given his vastly successful career, Shikhar has been able to earn quite a handsome amount of fame and wealth. This article provides a detailed insight into the financial assets and net worth of Shikhar Dhawan.

Born and raised in Delhi, Shikhar took to cricket at a very young age. Following the path of his idol Virender Sehwag, Shikhar became an opener with the same attacking abilities as Viru. His performances in the domestic circuit didn’t go unnoticed as a young Shikhar Dhawan was called up for the 2004 under-19 World Cup. Dhawan scored an impressive total of 505 runs garnished with 3 exquisite hundreds in the tournament. However, it took him a long while to make it to the Indian team due to a large amount of competition at the time. Shikhar finally got his well-deserved call-up in 2010 against Australia where he got out on a duck. It wasn’t until after the conclusion of the 2013 IPL that Shikhar was brought back into the side as a regular member.

Dhawan was picked for the 2013 Champions Trophy and the then 27-year-old grabbed the opportunity with both hands. For his stupendous performances, Dhawan was adjudged the Man of the Tournament and thus began his ascent in international cricket. Dhawan was even given the role of the test opening position assuming the role of his idol, Virender Sehwag. Paired with Rohit Sharma, Shikhar Dhawan produced innumerable classics with his bat in the limited-overs format. His test run was decent as well but following a string of poor performances, Gabbar was dropped from the longest format of the game; never to be called up again. His stellar run in the ICC events gave him the title of Mr. ICC as Dhawan continues to be a part of India’s One-Day side. At 35, Sikhar shows no signs of stopping as witnessed by his recent performances in the IPL and international outings.

Shikhar Dhawan is a part of the Grade A cricketers as announced by the BCCI in 2021. As per the terms of the contract, the Delhi lad is guaranteed an amount of INR 5 Crores a year. However, this does not include the match fees he is paid for representing his country after every match. Dhawan is also an integral part of the IPL giants Delhi Capitals as he’s been representing DC since 2019. However, he was traded in from SRH to the Delhi-based franchise for a salary of INR 10.2 Crores in 2019.

Shikhar Dhawan’s brand value is also quite high, and he is regarded as one of the most respected players in the world. Apart from his salary for the two teams, Dhawan has numerous endorsements deals as well. Currently, Dhawan is under contract with Jio, Nerolac Paints, Mutual Funds Sahi Hai, GS Caltex, fantasy cricket application Dream 11, Zero Risque, Fever FM, DB Dixon, StanceBeam, Boat, IMG Reliance, Ariel India, Vedantu Learn, MRF, and V Star. Through these brand deals, the left-hander earns in crores.

Shikhar Dhawan is the owner of a high-end designer residence in Delhi, India. As of 2021, the lavish house is estimated to be worth INR 6 Crores. He also owns a number of real estate properties across the country. However, this excludes his luxury apartment in Australia worth INR 7 Crores.

Despite his vast fortunes, Dhawan’s car collection is relatively small. Gabbar is the proud owner of some of the world’s most prestigious luxury automobiles. In addition to this, Shikhar Dhawan’s car brands include Mercedes GL350 CDI (about Rs 80 lakhs) and Audi.

As of 2021, the net worth of Shikhar Dhawan comes around to a whopping 96 Crores. A vast portion of his income comes through BCCI salary, IPL, and sponsorships. Shikar Dhawan has spent lots of money on his lifestyle, from past years his net worth was just INR 70 crores. But in the last two years, his earnings have been at a good level and in the upcoming year, he will grow more which 25% extra. Despite his age, Shikhar has been in terrific form and shows no signs of stopping anytime soon.