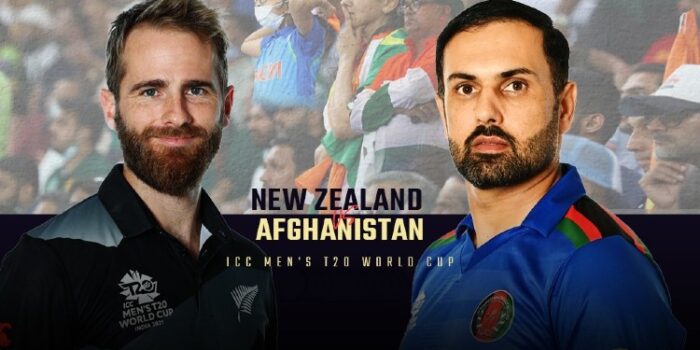 The two sides have never faced each other apart from two ODI matches are ready to match wits as if they have been at it for generations. In addition to fans of these two teams, the match will be closely followed by bountiful Indian fans as the result will affect their chances of qualifying for the semi-finals. The Blackcaps and Afghans are all set to lock horns in an unmissable encounter. The following article provides an insightful preview of the New Zealand vs Afghanistan T20 World Cup match.

New Zealand and Afghanistan haven’t played a T20I against each other to date. Set to lock horns against each other in the shortest format for the first time, no head-to-head numbers are available for this match. In conclusion, their match at Abu Dhabi on Sunday will mark their first-ever T20I encounter.

Williamson and his men kicked off their campaign with a humbling defeat at the hands of the new and improved Pakistan. Their run was brought back to life by a landslide victory over India which lit a fire under the Kiwis. Following that, they had to toil hard for their victories against Scotland and Namibia as they stand in the second spot after everything is said and done. On the other hand, Afghanistan proved to the world that they were not messing around with a whopping 130-run victory over Scotland. A victory over Namibia kept their hopes alive after a heart-breaking defeat to Pakistan, courtesy of the heroics of one Asif Ali. However, Afghanistan’s victorious run was yet again halted by a crushing defeat at the hands of India. Despite that, the door for their semi-final qualification remains open.

Since the Abu Dhabi surface is expected to be batting friendly, expect a high-scoring encounter. That being said, you may not look further than New Zealand’s batting sensation, Martin Guptill. Guptill rocked the house with his stellar inning of 93 against Namibia. Kane Williamson would also have his eyes set on stacking up a few runs as his run this tournament has been rather underwhelming. In addition to this, one cannot rule out the importance of Rashid Khan in such a riveting encounter. The leg-spinner has been a cornerstone for Afghanistan’s slow rise in cricket in recent years. Above all, his team would expect him to live up to the millions of fans glued to their seats.

The match promises to be an unmissable encounter between the often so considered “good guys” of New Zealand and a determined Afghan side. The battle lines have been drawn and the stakes are at an all-time high. The result of the match will determine who will accompany Pakistan to the semi-finals, the favorites New Zealand, underdogs Afghanistan, or the highly unlikely Indians. In addition to this, there’s little-to-no history between the two cricketing nations with absolutely no bad blood yet the tension between both the camps can be cut by a knife. Similarly, the uncomfortable investment of the Indian fans adds a lot of spice heading into the encounter. Who’s going to come out on top? Our guess is as good as yours. Above all, one thing is a guarantee that both sides will likely give it their all for the glory of their motherland.